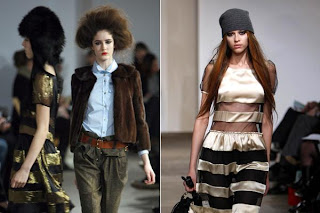 I'm no clothes horse, but it's even entered my consciousness that places like New York, London, Milan, Melbourne and hell - probably even Molvania - have recently hosted or are about to host Fashion Weeks. Magazine editors, store buyers and boutique owners are supposed to greedily covet getting front row seats in order to gaze upon the morbid sticks wearing fabric patches assembled by such designers as (the clearly loopy) Luella that we see above. I hope I never have to sit behind the chick on the left in a cinema any time soon....
Clearly I'm missing the point because my usual mode of getting dressed is to:
a) check the weather forecast via http://www.bom.gov.au/ - rain, heatwave, wind, dust storm or bushfire smoke?
b) see what's lying on top of the hamper (ie still has use in it)
c) put it on
d) leave the house. If I'm feeling extra perky, I might even brush my hair.
Fripperies such as colour coordination, eliminiting creases and adherence to the current style rarely affect my decision - if it's clean and decent, it's fine. In fact I've run a meeting in a black suit with trousers that were ringed at the bottom via Sapphire's then-three-year-old weetbix fingers and a few choice 'snail trails' on my shoulder from her sneaky nose wipe as we hugged each other good bye that morning. From a distance, it merely looked like fancy stitching.
Those hygiene-challenged days are mostly behind me unless I choose to eat laksa for lunch or have a salad flecked with fresh parsley, chives and cracked pepper (my teeth are like magnets for anything small but easily seen against white enamel).
Despite my lack of sartorial expertise, there have been a few selections in recent fashion collections that utterly amuse and mystify me. 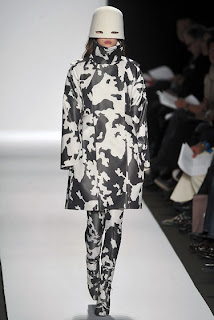 Here we have Narcisco Rodriguez, a favourite of Sarah Jessica Parker and other red carpet clompers, who has since decided that a face bucket is the way to go this season. Sure, it not only covers Bad Hair Days but also the dreaded and unwanted Zit Slicks. But in this anxious and fraught post 9/11 era of being highly alert to potential terrorism attacks and robberies I suspect that many banks, post offices and cricket grounds aren't going to be too receptive to letting the wearer inside their premises. 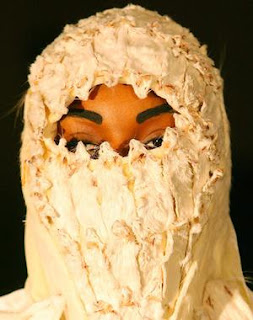 Then again, if you're watching your weight, maybe this little LeMindu (or should that be Le Minda?) dried rat-carcass head dress could be more helpful. As with Narcisco Nincompoop's attempts, it too protects the wearer from Bad Hair or Zit Slick effects but has the added bonus of making eating anything impossible. For the wearer and anyone sitting near them. It'll go down a treat in your local vegan falafel cafe after attending the anti-animal cruelty rally. 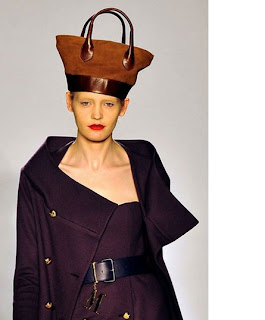 Not to be outdone, Isaac Mizrahi has decided to leave the face alone and celebrate the head instead. Why have an overpriced handbag dangling from a bony, emaciated model's arm when it can sit on her head, sucking out all remaining brain cells, intelligence and stray body fat? To be fair, a scone-set handbag could be rather convenient when the train is full and you need both your hands to grab hold of those green plastic anchor straps and to stop your butt brushing against the face of the seated bloke trying to read his newspaper.
I wouldn't want to bend over too suddenly if my purse was full of coins though. Very problematic and likely to attract crowds of small children. 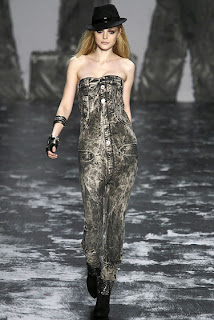 Stop the world, I really want to get off and wring out my sick bag. Coco Rocha (surely a play - and rightly so - on the world Cockroach) has made some kind of stone washed lycra body-stocking that mimics an exceedingly long crotched pair of jeans circa 1986. Or very high-waisted, I'm not sure which. It looks like something Rod Stewart left out in the rain. 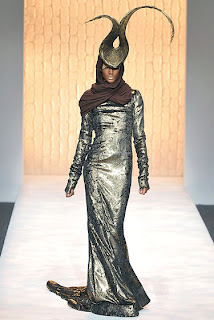 Christian Siriano is clearly a practical man. This would be perfect for my Friday morning shopping trips to Safeway as I check out the day-old bread specials, blocks of chocolate in aisle three and make sure that I do the full lap of the car park in order to return my trolley and retain that precious two dollar coin. I might have to take the Guinness Book of Records Fingernail hat off as I climb inside the Magna or risk having it enmesh itself unbecomingly with the steering wheel lock and pop-up silver sun shades. 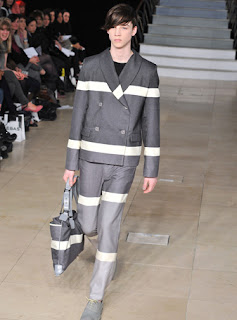 Don't worry fellas, here's one for you courtesy of the creative geniuses behind House of Holland. Yep, the eleven year old chap modelling this looks thrilled to be seen in it, doesn't he? And who wouldn't - he is, after all, the Poster Boy for warning you all about the dangers of passing out drunk in the street the night before the road painter is due. Form an orderly queue over (points to the far right), there, lads. This'll kill them when you're renewing your licence at Vic Roads! 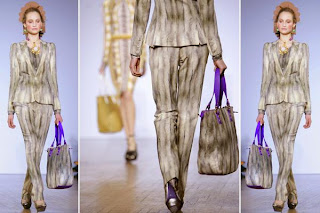 Ah, Basso Brooke. So that's where my t-shirt and shoe-polish rags disappeared to in our recent house move. Well done you for recycling them in such a subtle manner; perfect for the punter who isn't keen on hitting the tub or the laundrette too often. 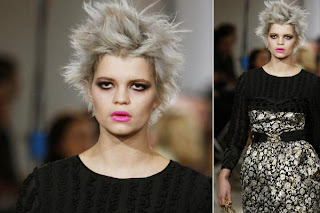 This sheila's face says it all really.
Trakkie daks and sensible shoes continue to be my body's best mates.
Posted by Kath Lockett at 10:08 PM

LOL!!
WOW! I didn't even spot the rat/mouse carcasses until you pointed it out!!
I was thinking the designer was trying to break into the islam market with the full-on head coverage.

You're in Melbourne now, Kath.

That one with the hand bag on her head and the last one; even the heavy make up can't disguise the under eyes hollows. Those poor girls need to eat something loaded with calories. Right now.
As for the clothes, the designers need to look at their drawings and ask themselves, "Would I let my wife/son/daughter wear this in public?" If the answer is NO the drawings should immediately be destroyed. I truly fail to see the point of these so-called High-Class fashion shows. The clothing is clearly unwearable and wouldn't inspire me to buy anything at all made by one of these famous houses.
Like you, I'll stick with what's clean and comfortable.

You're in Melbourne now

Wear a footy jumper and a beanie

Don't worry, BLACK has always been my staple and I'll perhaps accessorize it with a Crows scarf (not a beanie because I look like a potato) if I'm forced to a game or two.

yup right there with ya, built for comfort not fashion these days. Gone are the days of jeans so tight, I had to lay down on the bed with a coathanger attached to the zip to do them up! LOL Bags may come and go but nothing will ever match the buckle bag of the 80's - heck it has even been doing a comeback it was that good - and if you had a heap of keyrings hanging off it - oh sooo fashion queen of them all ROTFL.

Then again not much rivalled the comfort of the jeans and the black duffle coat with your favourite footy players number on the back
: - )

Clearly the hat in the first shot is an anti spring magpie defence mechanism. Ah saw the Rat Hat in offbeat news last week. . .something I can do with the rodents in my shed if only I could catch the little buggers and the 'hi vis' suit is very sensible thank you! How else would we know when to swerve and knock one of these emaciated clothes horses off their bikes? Finally, I am elated that 'bedhead' is 'in'!

Hehehe. I do love a good laugh at "high fashion" (the term "high" referring to the state the so-called designers were in when they dreamt up these crimes against the eyes and all things good in the world).

I always envisage the potential reaction from my blokey co-workers should I one day turn up at the office dressed in one of these fashion modern artworks.

That's so scary! And is there an kind of practical application to these? I can't imagine seeing handbag hats on sale at the local mall...

It's just kind of mystifying. So very, very impractical. I have never got past the thought that fashion shows of the highest designer order a GIGANTIC wanker-a-thon. This post has only re-confirmed those views. What the fark was that rat helmet about? Eewh!