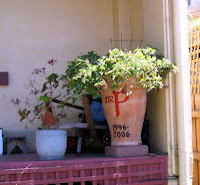 You regulars out there will know that finding out who Mr P is has occupied my microscopic mind for most of March, and even my frightened foray that ended in defeat a few days ago wasn't enough to deter me. How was I going to solve the mystery whilst still owning most of my face and limbs?
Luckily for me, Mr P's owner, Tam, read my note, decided (wisely or unwisely, depending on who you ask) to email me:
"My name's Tam, I've lived here for eight years and Mr P's final resting place is my design.
So you'd like to hear about the amazing Mr P, aka Perry. Perry was my beautiful, intelligent and almost-human German Shepherd who passed away 3 years ago from cancer. His ashes are in a mahogany box sealed in plastic and buried at the base of the urn. I decided to plant a peppermint geranium above him because the smell would have driven him mad when we read for hours on the front porch together.
Mr P was well-known around Flemington, partly due to the sunglasses he wore on sunny days for an eye condition. He looked pretty spiffy in them, especially when teamed with his rainbow bandanna. Oh yes, Mr P was also gay. Which wasn't a problem with me, except he was attracted to whippets which wouldn't have been my first choice of breed for him. Give me a noble husky or even a doofus labrador any day! He was my best friend for ten years." 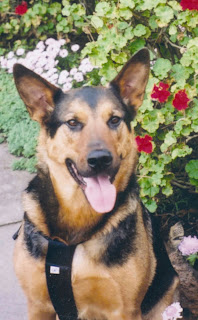 Isn't he handsome? And, when I went around to meet Tam and her partner Aleixo today, I found out more. Perry was named after Perry Farrell from the band Jane's Addiction, but I suspect that Mr P might have had a greater propensity to wee on every bush that he passed by than perhaps Mr Farrell did even at the height of his alterna-rock decadence.

However, the mystery of the hulking beast growling behind the door had yet to be solved, because when I first arrived, Aleixo was home alone and Tam had taken Daria for a walk.
Daria, yes, after the TV show featuring the 'nothing can excite me' voice of Janeane Garofalo. That's a far better choice than the names that Mr Farrell has inflicted on his two poor kids - Hezron Wolfgang and Izzadore Bravo!
Daria, bless our Benevolent Sweet Lord of Lindt, is a loveable Rottweiler/German Shepherd cross that Tam adopted from the Lost Dogs home after she'd been treated abominably - and then dumped - by a previous owner. To this day she is terrified of fluttering objects such as curtains, or milk cartons and is the life and soul of Travancore 'off-lead' dog park. Tam is a dedicated fund-raiser for the Lost Dogs' Home in North Melbourne and has made up a calendar that features all of Daria's dog park mates on it, all grinning ecstatically (call the Lost Dogs home and ask for Kate in fundraising if you'd like to buy one). 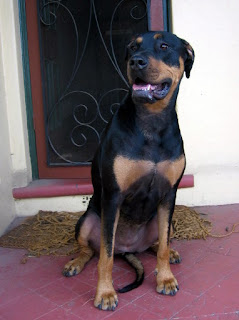 Tam was at pains to point out the front door mat which so freaked me out the other day (was it a snack for the beast lurking within?) was merely old and not a chew toy for Daria.
By this stage, Daria was leaning up against me, her not-inconsiderable 41 kilogram bulk reminding me of our dog Milly's relative slightness at 13 kg. She was indeed beautiful, and trusting and friendly with a gorgeously shiny coat.
Looking around their living room with its long leather sofa, rubber toys, footies, soccer balls and tennis balls in various states of disrepair showed me who really ruled this particular roost.

Tam too noted that nearly every single framed photograph features dogs: "This is my Dad's dog just before he died, this is new one - isn't he beautiful? Here's my first German Shepherd that we got in Canberra; Mr P as a puppy, Mr P in his bandanna and sunnies; Daria on her first day with us....."
Aleixo is from Brazilian, but it was most definitely a Gallic shrug he gave. "Daria is crazy, but special and big. We love her." I was convinced of that already and I'm sure she'll have just as wonderful life with them as their beloved Mr P had. 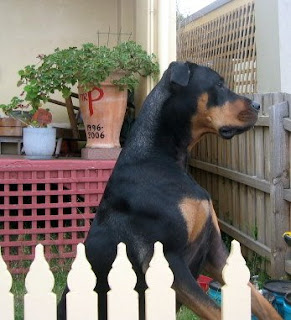 Ooooh goody! Dexter's home - can he come over and have a roll with me on the grass?
Posted by Kath Lockett at 5:48 AM

People in the Sun said...

Is it inappropriate to wish I could see a photo of Mr. P. wearing sunglasses?

Mystery number two solved. What's next? isn't Mr P a lovely looking dog, reminds me quite a bit of my shepherd, Mad Max 2nd. Best dog I ever had. Daria (loved that show) also looks beautiful and how wonderful to rescue a dog that's been mistreated and have her learn to love and trust you so well.

I do so like it when a mystery is solved...
Especially when I can help!
I will scan in a pic of my boy in his groovy sunnies - he was such a hussy when he wore them - and send to Kath.
BTW I've discovered this column is best enjoyed with a 100gm block of Mint Intense Lindt.
Tam

That 41kg dog would look lovely tied to a fence alongside a miniature schnauzer. I'd like to see it's snotty owner's face then.

Excellent . . I can now sleep at night!

Aw River, you'd fall in love with Daria as well and you're right about the rescue dog scheme. Why spend a fortune on a poncy, snobby schnauzer in-bred when you can have a sturdy, best-of-every-breed-going dog from the home who will love you forever?

Tam, you're right on my wavelength with Lindt - and yes, your fans are asking for a photo of Mr P with sunnies on!

You're right Jah Teh - maybe Tam will lend me Daria for the morning....

Hi there! Thanks for taking up the challenge at BOTB.. Goodluck to us!

Oh I'm so glad that mystery's been solved

I must admit I'd love to see a picture of him with the sunglasses on! I ahve 2 german shepherds and I don't think I could ever get them to wear any... or bandanas for that matter!

Glad to see a mystery solved!

Ah Tam is clearly someone after my own heart. We previously had 2 german shepherds Bonnie & Clyde and they were amazing dogs. Clyde went first so we too collected a mistreated rescue dog German Shepherd/Kelpie cross - much like Daria, lets just say she has a unique personality and leave it at that! Then when Bonnie finally passed away, we went to the dog rescue home again and happened on a litter of 8 week old Rottweiler/Kelpie crosses and chose a dear sweet girl to bring home - that would be Bella. She is the very well behaved one that makes the other one's behaviour look so much worse than it is lol. Wouldn't swap either of them for anything, they both make me laugh several times a day with their antics and well when you give a dog your love, it comes back in spades.

Just goes to show that behind every pot plant is a story.