No-No Nanna lives here
I've mentioned before that Sapphire might only be nine years old but often has the wisdom of Yoda combined with the pursed lips/Cat's bum disapproval tendency of a new millennium Mary Whitehouse.
Previous concerns she's raised with me have been my continued habit of kissing Skipper the rabbit on the lips, singing songs over and over with Milly's name inserted in them and telling strangers on the tram when their shoelaces and flies are undone or they have lipstick on their chins. This week she's gone all The Biggest Loser on me and is trying to be helpful, albeit in her uniquely tactful way: 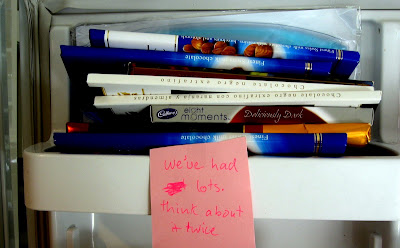 There've been some telling signs of late that my antics on the way to and from school are also becoming a source of embarrassment for her:

"Mu-u-u-um, stop talking so loudly to Juliet's Dad.... everyone's looking at you."

How could they be? I was calling across at the traffic lights and he was in the car on the other side of the road and needed to wind his window down. Everyone else should have been busy crossing the road before the bip-bip-bips stopped. Sure, your mate Juliet might have been slumping in shame in the back seat but I wasn't talking to her, was I?

Fine, she replied, shoulders slumped, gripping Milly's lead and looking straight ahead. Obviously my retort wasn't the "Oh darling, I'm so terribly sorry, it won't happen ever again my dear, sweet precious petal" that she wanted.

"Mu-u-u-um why don't you have a shower before you take me to school? You've still got eye boogers."

Look kid, I get up at 7am to make your lunch, feed the dog and the rabbit, unpack the dishwasher, get your breakfast, hoik the buckets of shower water from last night out on the garden, hang up a load of washing, read/sign/pay money for a bucketload of urgent school notes and hassle you to get dressed, eat your breakfast, stop playing with the dog and do some quick viola, guitar or recorder practice before we go to school. And I have to have that first cup of coffee. No negotiation there. And I ain't getting up an hour earlier at 6am to go for a run, cool down, have a shower and pretty myself up just for a five minute stroll into the school yard where you ignore me the second we walk through the gate anyway. Geddit?

"Mu-u-u-um, why don't you have a normal job, like Phoebe or Sarah or Sian's Mums do?"

Because I don't want to. For about eighteen years I did do what they did, but eventually I started to hate it. My body started to let me down, I felt tired, resentful, angry and sad and didn't spend enough time with you or Love Chunks. I now laugh more, notice more things, sing more (whether you like it or not) and have met more interesting, genuine and kind people than ever before and I'm starting to get paid for it. And you get to invite your friends home for playdates instead of being stuck in after-school care every day and that's a good thing, isn't it?

She nodded again, slipping her hand into mine.

Tough. I just have to. I must. See, if I don't kiss you or Love Chunks before we go our separate ways for the day, it just doesn't feel right. Yes, like when we all say 'cheers' and clink glasses and you've got to tap everyone's glass or the vibe doesn't work. And yes, I know you're studying Unicef and the rights of children at school right now, but as your parent, I surely have a right to kiss you. At least once in the morning and once at night. You don't seem to mind being kissed at night, do you? And if anyone here teases you, you can tell them to get stuffed. Yes, you really can. Because having someone wanting to kiss you is a really nice thing actually.

She rolled her eyes and proferred her cheek as though she was about to be brushed with a dead fish. I kissed her, angrily at first, but then the softness of her skin, the sweet smell of her hair, the warmth....

"Yeah, bye Mum." She was off before I opened my eyes. Perhaps I won't tell her that I'd just auditioned for a tacky new game show, considered getting another tattoo or was about to interview an old lady who feeds the pigeons every morning.

And at morning tea time, she still made her presence felt: 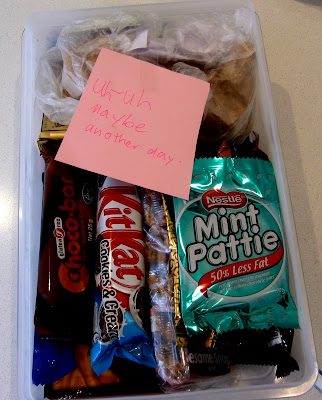 That last picture........please tell me that WASN'T Sapphires lunchbox that you packed for her?
As for the kissing etc., sounds like the pre-puberty has hit. After this she'll be a teenager before you have time to wash away the eye-krispies.

Rest assured, dear River, that the last photo is NOT Sapphire's lunch box or anything she's allowed to touch.

It is, in fact, a container of choccy bars that I've yet to review. Note the old classic like the Mint Pattie and a cookies-n-cream KitKat chunky, a gluten free bar and in the wrinkled bag is a huge chunk of Swiss couverture.

The fancier boxed stuff or blocks is kept in a box in the kitchen or in the fridge. Life is indeed very tough. For my butt size, that is!

hahaha, will need her to come over my place to leave all those sensible post-it notes. Definitely has the sensible Pauline genes in her.

what a classic - yep my two get chauffered to the door of their school every day (since mum works there). Ah but when we part ways at school, barely so much as backward glance - a kiss - oh no way out of the question!! Then again they are nearly 17 and 16 and boys LOL

Drb, be careful what you wish for, because she'd love to. Nothing like a carefully worded note to let you know that there's very little that slips past her.

Naomi, my father was a teacher at my highschool and because it was so large (1500 students) it was arranged quite easily that he'd never ever have to teach me or my brothers and we'd studiously ignore each other if we ever crossed paths across the quadrangle. One day when I was 16 I was being a smartarse in front of my friends and decided to rush up to him and say "Hi there DAD." He was on to me and grabbed me in his arms, gave me a huge bear hug and smothered me in kisses. The kids clapped and cheered. Dad - One, Kath - Zero.

Kath, classic, loving your Dad! My kids already reckon I am way too embarrassing (though not at school usually). Mind you after they saw that woman on Wipe Out the other night with her rather curvacious body squeezed into an all in one wet suit kind of deal saying "mummy loves you darlings" down the camera, they have decided perhaps I am not that bad- but did find it necessary to warn me not to get any ideas from the woman from Wipe Out LOL

I'm still stunned that you get paid to eat chocolate and still don't get fat! UNFAIR! I haven't had choclit since Christmas and am barely keeping on top of my weight loss! Now as for being embarrassing . . keep it up, she'll get over it. Although Clare still berates me for speaking too loudly at checkouts, especially when the checkout chick is a sullen little 17 year old. Oh and I stare at people apparently!

*off to have some chocolate now* (no one cares enough about me to attach notes to them... *sniff*)

A great post Kath. Champagne blogging! And I never knew how to spell 'hoik', or thought to for that matter.

There is NOTHING wrong with singing songs with the original lyrics substituted with pet-relevent words...

This old tat, he played one, he played kick-knack in the sun, with a knick-knack, tatty-rat, give a tat a bone...
this old tat came rolling home.

Purrs its head off when I sing this.