Now that we've established what the Mysterious Monolith that sits on top of the Flemington Housing Commission is, I've found a somewhat smaller but still puzzling riddle to ruminate on. 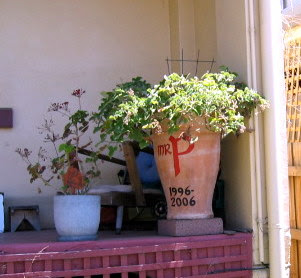 Mr P apparently lived for ten years from 1996-2006 which isn't a long innings by anyone's standards, let alone a cat or a dog's.
Maybe that's why he is, at present, sitting proudly on someone's front verandah, doing a sterling job of assisting the growth of some geraniums.
I don't think Mr P's fans would go to such lengths to preserve his memory if he wasn't a loved family member, but I've yet to find out exactly what kind of animal he was and who arranged this particular memorial.
Or am I barking up the wrong tree, scratching at the incorrectly carpet-covered post? Is Mr P instead a now-defunct portaloo company? A death metal band suffering an untimely demise or a gardening concern that was forced to resize rather drastically?
Stay tuned.
That's right: never let it be said that I don't investigate the burning issues.
Like this one, below. 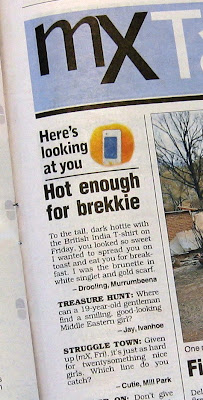 Do these 'I fancy you, yes you, the cute guy in the 'My Finger You Pull' Yoda t-shirt on the 57 tram' advertisements placed in the MX newspaper actually work?
For example, did the Tall Dark Hottie get eaten for breakfast by the brunette in the white singlet and gold scarf? I'm guessing that he did, particularly if the hungry chick was only wearing a singlet without any pants on.
Did the 19 year old gentleman find his smiling (yes, he specified smiling), middle-eastern girl? And if so, what happens during her PMS week or if she wants to stop grinning like an idiot, put her head down and read the other sections of the paper?
Did 'Given Up' tell 'Cutie' of Mill Park what train line he catches? More importantly, what characteristics are used to define one's self as a Cutie, especially if you're from Mill Park?
And Love Chunks wonders why I find it difficult to get to sleep at nights.......
Posted by Kath Lockett at 12:41 AM

I'm glad it didn't say Mr H, I'd suspect some sort of tribute to the Howard years...

Why do people place these stupid ads? What's wrong with leaning over and saying "I like your t-shirt/bag/hair/whatever". If the other person then says "p--- off", at least you'll know straight away that he or she isn't worth the effort.
I'm curious about Mr.P. too. Mr Pottery perhaps? Broken shards of the previous pot providing drainage for the new plant?

I reckon Mr P was a pet rat.

Your curiosity is insatiable! I've still got my old dog's ashes sitting in a little green box somewhere in the shed. Perhaps Geraniums are the answer! As for the personals . . .I agree with River! We just don't 'talk' to people on public transport any more. Ha! Your capture reads 'woryingl'

Miles, if it said Mr H, it should have been placed right at the back of the house in the ancient 'poo cart alleyway' IMHO.

River, let's just be glad that we're not 'out there' any more, if having to look through MX is the only way to get a date.

Ashleigh I'm not sure that rats live that long. I had a friend who owned two as pets and I don't think they lasted five years...

Baino, yep, I'm nosey. However, I don't possess the bravery that should accompany such nosiness. I've yet to knock on Mr P's door and always seem to be passing by when I've got Milly on her lead, so if Mr P is a cat I don't think having a dog with me is all that appropriate.

Shouldn't it be Master P?

To the Turkish pizza with Zatar, halloumi and tomato I saw being consumed on the 4:13 to Upfield, I love you, and want you inside me!