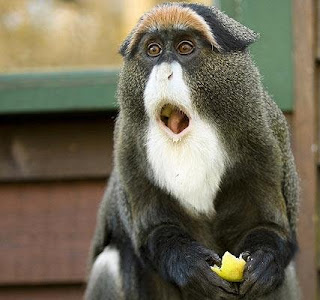 Thursdays often tend to be good days for people-watching on public transport. It is the eagerly awaited day for salaries, pensions, dole and other such financial fripperies and folk from all walks of life seem to choose this day to travel across town on the tram.
Today I needed - no, time for honesty: wanted - to go to Borders. Mostly to buy some birthday gift-giving books at Sapphire's request (the fantastically funny Clarice Bean books by Lauren Child) and to visit my own book, still sitting there in the Psychology/Self Help section. I decided to play it safe and go on the relatively-well-off 59 tram instead of the sometimes-dodgy but always-smelly 57. 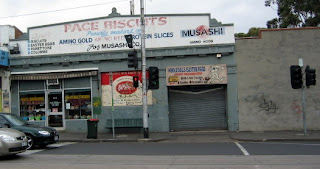 Such shallow decisions always come back to haunt me, because there were enough 'colourful characters' on this tram as any I've seen waiting for, performing on or falling-through-the-open-doors-of on the 57.
Today I found a seat - the only one vacant - and soon discovered why. Opposite me was an elderly woman with a beard to rival that of Colonel Sanders and a vocab that was not only filthy, but one that she wasn't keeping to herself. "Phark! Phargin Pharkers Phark!" she said, over and over, hands gripping her rainbow-coloured umbrella and tartan shopping bag.
A little bit of spray caught the beams of sunlight through the window as it shot in my direction, but I wisely kept my head down, pretending to be busily rummaging in my backpack. No doubt it landed somewhere in my hair, but I didn't feel it, so in my eyes it didn't count. All unwanted eye contact and tell-tale spittle-splat was successfully avoided and she thankfully decided to get off where the little red toast roack and yellow cheese stick sculpture marked the start of the tollway.
Two old-but-fit ladies got on and took her seat. Both were sporting sensible haircuts without artificial colouring (or flavouring, presumably), dangly earrings, Berghaus backpacks, three-quarter-length canvas pants, Rockport walking shoes and the latest literary top ten sellers. Uni lecturers with a day off from the roundtable conference or lesbians on a lazy day?
Then I heard one say to the other, "And you're not going to believe what they've named them."
"What, the twins?"
(sighing audibly), "Yeah, the babies. Only Henry and India."
"Oh dear. How did Reggie take that?"
"Not well, Maureen, not well. I mean I thought our daughter had more sense than to name one kid after a megalomanical mysognistic ruler and the other after a poverty-stricken third-world nation that she's never even visited."
"Mmmm", replied her friend sympathetically as they both bent their heads back towards their novels.
A young couple sidled onto what would definitely have been a still-warm seat. He automatically put his arm around her, and whispered into her ear. Ah: they were clearly in the first few months of wild, crazy and total-fascination-with-each-other stage of lusty love.
But my rose coloured specs were smacked off when I heard it; that terribly familiar but frightening sound that has plagued me since sitting mid-year exams in a freezing classroom: Garrurgh-snort. That juicy, phlegm-laded, drawback snort beloved of teens and young men everywhere who are too nervous about their sexuality to even consider carrying a tissue.
Garrurgh-snort. How could his girlfriend stand listening to that in her ear? But no, she was wittering on about "Are you hungry, babe? Wanna grab a coffee at Gloria Jean's?"
Garrurgh-snort. "Nah, but I'd definitely do a red rooster pack."
Garrurgh-snort. Oh. My. God, he could provide the mayonnaise to go with the meal....! "Okay sweetie, let's do that. Do they have coffee there?" And she snuggled into him, perhaps so she could hear the snot oscillating inside his naval cavity and up the back of his throat in stereophonic sound. Bleugh. 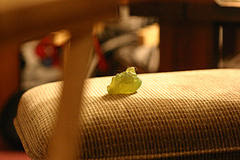 At the corner of Flemington Road and Elizabeth street a young guy about nineteen years old got on and sat next to me, across from Phlegm Bag and Coffee Craver. He was taller than me, but soooo much thinner. I could snap him across my knees like kindling, so I wasn't exactly intimidated by the resplendently huge purple mohawk he was sporting. I had been far more frightened - at twelve years old mind you - at seeing the real Kings Road punks in London in 1981 who'd as soon as spit at you as head-butt their nannas hello.
Instead, I decided it was my turn to be the loon who starts up a conversation that no other passenger wants. I grinned brightly at him and said, "Boy, I bet that hairdo takes a bit of work to put together in the morning."
Proving my theory was correct, he gave me the very tiniest of nods and looked down at his mobile phone and started tapping out an SMS: anything to stop any further interaction with the insane old bag (or dag) sitting alongside him.
Fair enough really and it was my turn to get off.
Posted by Kath Lockett at 11:02 AM

I like these posts. As someone from Sydney, trams are still a novelty to me even after living in Melbourne for almost a year.

I ought to provide my own 'tram talk' posts. But I usually have my iPod blaring so can never hear what people say, just imagine what I think they're saying by their body language.

Clearly Reggie is a fan.

Is it just me or are the verification words getting funnier?

(Rob here by the way - but wasting time pre lecture)

Ergh! Yuk! phlegm snorters! Makes me want to vomit. And I hear it ALL the time. Men at the checkout. Mostly the older ones, some young blokes, even an occasional girl/woman. Didn't their mothers teach them how to blow their noses? What's become of society in the last thirty years? (I hear the same sound coming from my own couch, daily. If I'd known then what I know now, I NEVER would have brought him home...)

Thanks Benjamin - your imagined discussions would be great to read - I'm sure they'd be pretty accurate.

Ah, so her daughter and partner could be Indiana Jones' fans? Still doesn't seem acceptable though.

Agree with you totally, River. Hearing that slimy stuff get inhaled back up the nose and down the throat makes me feel ill and wonder just why the hell nobody else seems to mind.

We don't really have safe public transport, so whenever I go overseas I go a bit crazy with the people-watching. I've only ever been on a tram once, although I go on buses a lot...

People-watching at the ice-rink is a lot of fn though - body language is very much more exaggerated...

Social customs vary considerably - for example in China its considered disgusting to blow your nose into something that you shove into your pocket and carry around. People squirt a well-aimed stream of snot onto the ground, into cigarette sand-stubbers, and so on. And sniffle and snort. Which is worse? Who am I to say?

But it does drive me mad (I have somebody at work who does this, and its gross). What's so wrong with a tissue? And why do the women put up with it instead of saying "hoi, tosser, blow nose or I'll blow off?"