Would you phone them if you saw them in the Yellow Pages?

As I was driving along Portrush road, the station wagon was nearly swamped by a removal truck. In the front were three blokes that looked about as responsible as the three stooges and were certainly less attractive.

'Bazza's Beaut Removals' was painted amateurishly in red down the side of the truck, presumably by a right-hander having a go at splashing it on with his left. It looked about as professional as Courtney Love's lipstick after a quiet night smoking crack. Would you ever, in your right mind, choose them to do the job? Would 'Bazza' be the bloke to box up your most beloved belongings? 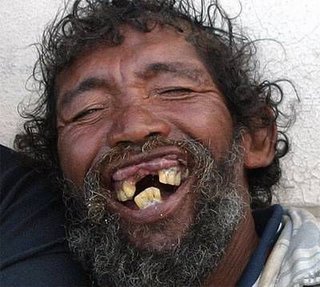 Bazza - plenty to chuckle about

They appeared to be heading to a job (unless it was ten minutes past an iced coffee and finger bun time), so somebody had been gambler enough to trust them. The only reason I could think of was that Bazza had coughed up for a decent spread in the Yellow Pages, because seeing his truck cough and chunder along wasn't going to have his business linger in the memory as a positive one.

Love Chunks and I moved a few times in the nineties, firstly from Adelaide to Melbourne. We had only just moved in together, so our space in the truck was miniscule. So was the budget allocated for our move. We were told to have everything all packed and wrapped up securely because our bargain basement rate didn't stretch to boxes or blankets. This was all done in time for the 5pm collection, so, at 9pm when the truck hadn't arrived my cuticles had been picked to bloody shreds. When the bell rang, we were torn between wanting to let them know how utterly pissed off we were at their tardiness, but also grateful that they'd come at all. Besides, would an angry mover be tempted to fling in, say, an andiron or complete set of Mr Universe weights on top of our box of crockery? We both wisely kept quiet and had anxious smiles on our faces.

The load did arrive in Melbourne - a week later. We were never quite sure why it took so long, but seeing as we were staying in our friends' fully-furnished guest room, it didn't really matter. All we had to do when we unpacked into the flat we'd rented was to sandblast off the ID stickers they'd used on every single item. To this day we have a bookshelf and deckchairs with the *&^%ing stickers on - no amount of scrubbing, eucalyptus or sandblasting was getting those little suckers off.

Less than a year later we found ourselves preparing to pack up the flat and move up north to Darwin. This time, thankfully, the weather bureau was paying, so it was a huge company, five star, prompt service and drivers that didn't look as though they'd had a cone before arriving. I was at work the day they arrived, but poor old Love Chunks had to endure their comments about our belongings as they packed. "Love yer Abba records mate. What are ya, gay?" When they saw his dusty windsurfer standing up behind the kitchen door: "So, ya did a lot of windsurfing here in Flemington hey?" Perhaps next time we'll ask what the going rate is for total silence and no insulting remarks, Love Chunks commented to me later. He was still seething over the "Oh, ya got a trumpet. Give me a tin of baked beans and I'll give you a trumpet, he he...."

Rude comments aside, our furniture and car arrived earlier than we did. In the days of Ansett airlines, our belongings were waiting for us but our clothes had been sent to New Zealand. And no, $50 'to see you through' didn't cut it for three days when it was 36C and 100C humidity and you hoped that spending it all on a pair of bathers would outweigh your morning breath and embarrassment at entering a restaurant in only a thin strip of lycra.

Two years down the track (1996) found us winging our way back to Melbourne, looking forward to real seasons again. This move was our choice, so the weather bureau weren't going to put their hands in their pockets to help us get down. It was no surprise also to discover that what once barely filled the back of an ex-divvy van truck now quite comfortably took up an entire container. Sensibly, we decided to go for the mid-range - not so cheap you'd be in danger of an ulcer and not so expensive that we'd end up having to live in the packing boxes once they'd arrived. A couple of efficient blokes packed up without a word in what seemed like a eyeblink. Everything - even the kitchen flip-top bin - and it's contents - were tootling over to some storage facility in the steaming hot sunshine. How I hoped that Love Chunks would be the lucky one to open that particular box.....

And he was, bless him. It had been helpfully labelled 'kitchen' and as the chef of the two of us, he'd taken the job of setting up the kitchen just as he preferred it. He was bent double, outside in the fresh air, gasping from the odour and lacking the energy to wave the dog away from it. It made a lovely scene and I'm sure the neighbours would have been thrilled at the scene blowing in their direction.

Lastly, we got homesick for South Australia by the end of 2000 and wanted to come back home. What a relief to discover that there was actually jobs available for us. On second thoughts, it was sobering to realise that they were available because we were no longer bright-eyed and bushy-tailed young graduate trainees, but thirty-somethings with solid experience and the coolness factor of Kamahl. Oh well.

Nothing went wrong - no late arrivals, no rude remarks, no permanent stickers or gift-wrapped rubbish. We drugged the dog so that she'd cope with the 9 hour drive in the car - Sapphire, who was eighteen months old at the time, was fine. Poor doggy stumbled out of the car, her eyes like little blissed-out triangles as she unsteadily stood on the back lawn. And vomited.

Five years on, it's still home and still my favourite place; but that's more to do with the beings that live in it.
Posted by Kath Lockett at 5:22 AM No comments: