Buzz
My father was a hobby beekeeper for many years and - this is utterly true - my mother is deathly allergic to bees. Cue lots of hilarity about him trying to kill her etc, but his hives were a long way from home.
What I used to tease him about (apart from the obvious Freudian interpretation of his repressed feelings for my mother) was his subscription to ‘Australasian Beekeeper’ which was posted out every couple of months. Back in the 1980s when I was a scornful teenager, this magnificent publication featured a black-and-white photo on the cover featuring some lucky apiarist's jars of honey. 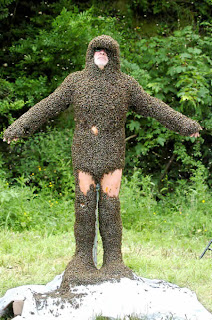 “Whoo hoo Dad, it’s here!” I’d mock, but the day that his jars made it on the front cover was different. The publication was held a bit more reverently as it was handed over, and his little brown eyes misted up with pride. "Oh yeah well it's nothing really," he muttered but I noticed that it lived on top of his beloved Aussie Geographic and BirdWatcher magazines on the home-made chess-set coffee table for nearly a year afterwards.
Jars of fame notwithstanding, the bonus of having fresh honeycomb to chew on and delicious strains of honey available at any time - red gum, blue gum, Salvation Jane, orange blossom is a fond memory. Even now, I feel a little bit guilty at having to buy jars of honey from the shops - years of having it on tap via the huge warm tank in the shed are hard to erase.
Death issues aside, Mum handled it all with a surprising amount of calm - as long as the hives were on faraway farms and all spare boxes were stored on the side of the shed furthest from the house, she wasn't bothered. Sure, she needed to cart around some tiny pink pills to pop within five minutes of being bitten and then get to a hospital or face death by asphixiation within half an hour but it sure was a lovely treat to have some honey and cream on some fresh bread for dessert after tea.
In reality, it wasn't Mum's deathly allergy that loomed over the family, it was Dad's physical condition when he returned home from shifting boxes or extracting honey in his tiny caravan. Even when he wore the necessary head nets and wielded a defensive smoke bellows, he'd invariably have a few annoyed little beasties angry at having their food supply plundered who'd find their way under the brim of his hat and use his face as a form of punctured stress relief.
As such, we weren't unused to having a bloke who resembled an antipodean Elephant Man trying to snuffle down some chicken and coleslaw salad through comically swollen lips on a summer's Saturday night.
I did feel sorry for my first boyfriend Sean however. Not only was he going out with a high school teacher's daughter - and one who tried to teach him chemistry and coached him in the cricket team - but he was now invited to have dinner with the teacher's family. As The Boyfriend. He did a sterling job of politely chatting with my Mum, enduring the curious stare of my younger brother and over-protective glare of the older one and sat down nervously awaiting the meal when Dad walked in.
"The bees were pretty angry today," he smiled.
Or at least, we think he was smiling. With two burst pork sausages in place where his lips used to be, one eye fully closed and the other resembling a hot-pink-coloured hard boiled egg, it was difficult to know what emotion he was currently feeling. The dangling threads of drool didn't help either.
Sean visibly reeled back in his chair before regaining control of his reflexes and reverting back to the Polite-And-Trustworthy-Boyfriend position, forcing his stressed blue eyes to stare back into the face of the Alpha Male opposite him.
"Er, what happened to you...." he choked a bit, "Mr Read?"
"Well Sean," and here I could tell that Dad was just loving being able to scare the month's fibre content out of his daughter's main squeeze because his lips turned upwards in a grotesque imitation of a smile that instead looked more like two rutting sea lions. "A couple of them buzzed up through my shirt and had a few goes at my face. Don't worry, it looks worse than it feels," he patted Sean's arm and sat down in front of his plate.
Reassurance by the injured is always comforting to hear but it did nothing to ease the disgusting visual challenge of having to see my father attempt to eat fried lamb chops, peas and carrots with a face like a obese party balloon. The sound effects only made it worse - the snuffle-snort, snuffle-snort, cough, whoops sorry, where did that pea fly off to - accompaniments made Sean's brave attempts at eating and remaining unfazed truly heroic. The slurped-up bowl of icecream and chocolate topping that followed is still too obscene - nearly 25 years later - to describe without my hands getting too shaky to type.
"Ssssho Sshean", Dad lisped, a half-digested circle of carrot resting, unfelt, on his lower lip before dropping onto his chop, "Where are you taking Kath tonight - the moviesh?"
Sean's head drooped as his shoulders started to shake. "Ssshean?"
He wiped away some tears of mirth before he answered, "Yeah. We're going to see 'Creepshow'."
Perhaps it's no small feat that he willingly survived me and my family for three years. 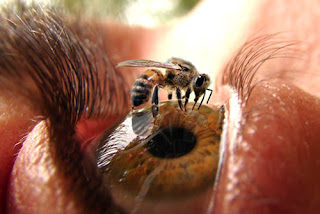 Well that was great - with my morbid terror of bees and all.

And thought, wow, that didn't hurt at all.

However, like Lily Allen, I've still been taken over by The Fear...

Oh My God!! That bee on the eyeball just creeps me out! I got stung by bees while living in Thebarton. Right outside the back door was a huge pergola covered in grapevines. In spring the grape flowers were covered in bees, the paving underneath was covered in drunken bees who'd had their fill of nectar. So I went wandering outside to bring in the washing, stepped on a bee, hobbled back inside, removed the sting, and as my foot swelled up went back outside only to step on another bee with my other foot! Hobbled back inside again, removed the sting, then with both swollen feet safely wearing thongs, finally got the washing in. Luckily it was a Friday afternoon, didn't need to wear closed in shoes until going to work the next Monday.

What on earth brought that on?

The Lady Of The House and I have been reading this and hysterically giggling. I've had to wipe the tears from my eyes to be able to type this.

What can I say? Apart from getting progressively allergic to the little blighters, nothing really.

Splutter-warning: do not attempt eating M&Ms and sipping tea while reading this blog!

Well thanks for the eyeball! That curtailed the giggles in a nanosecond! Jesus that'll follow me around all day! I thought if you 'smoked' them it made them docile! I can't say I'm a fan of honey and was only ever stung once thanks to a mop of curly hair that trapped one of the little buggers which clearly panicked, stung me and met its maker!

Miles, if you get stung often enough (ie a dozen times per summer like I did), it's rare to get much of a reaction. However, twenty years later when I got stung on my middle finger in Darwin (trying to flick a bee out of the pool and save its life, ungrateful bugger), it swelled up like an inflatable footy fan's finger into an unbecoming 'f**k you' motion.

River - great picture aint it. Nothing like a beesting on two feet to remind you why thongs should be worn at all times.

Ashleigh - no bloody idea. Just a fond memory that managed to rise to the surface of the murk.

Sonjetta please tell me that none 're-emerged' via your nasal cavities....

Baino, smoking them should make them docile but there's always those rebels who fight a good fight and are prepared to sacrifice their arses and their lives for a good cause;ie disfiguring my father.

This blog creeps me out - I have never been stung by a bee (touch wood it stays that way) but I am 100% sure I am deadly allergic to it....
They are lots of bee in the backyard now happily buzzing around the basil hedges, so I am staying indoor..

So your two brothers are "Sons of a Bee keeper"