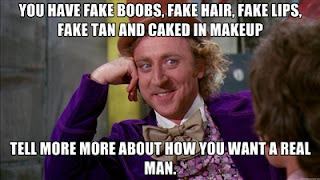 We were sitting in the car just outside the high school gate, having one of those conversations that both of us are not only enjoying, but also not wanting to end.

Sex.  To be more precise, recent concerns about the easy access of pornography and how it might affect the expectations of some teenagers.

"Is a guy going to expect someone with inflatable duck lips who is automatically able to writhe around like a pole-dancer whilst wearing more on her feet than her entire body?  Will he also expect her to provide some oral pleasure and be instantly amenable to letting him enter her, erm, 'back door' the second he walks - usually naked and in a highly visible state of excitement - into the room?"  That was my question by the way, not my daughter's.  It seems so long ago when a 'Do you like me - tick yes or no' note was handed around in year eight geography.

Sapph spoke of recent discussions they've held in Humanities on the issue.  Will the never-ending availability of sex and sexual acts online give some kids and teenagers a completely unrealistic idea of what 'real' life relationships are going to be like?  Will the saturation of 'take it, bitch' clips readily on hand (often when you don't want them - don't try a google search when your spelling isn't up to scratch) completely dissolve the idea of having sex between two genuine human beings with a back story and shared respect and real passion?

Our conversation then took a slightly different direction.  "And what's so attractive about male genitalia anyway?  They just dangle there to make 'ooh that would have hurt' or nutcracker jokes for at least half the videos submitted to 'You've Been Framed.' And with something always 'there' it must surely always be demanding some attention. How could you keep your mind of something that moves of its own accord?"

Nodding, I replied, "Yep. No wonder boys play with them so often: they're easily accessible and very easy to please."

Laughing, Sapphire commented that the girlie bits weren't so flash to peek at either. "But they're on the inside, at least, so unless you grab a small mirror, they don't bother us as much."  She paused for a moment. "That is, unless you're really flexible gymnast like Juliet, but if that was me, I'd think of better things to take a closer look at."

This all reminded me of a stand up routine by Ben Elton way, waaaaay back in the 1980s when he too commented on the ugliness of mankind's rude bits. "He said that no architect had ever been so inspired by the male appendage that he had to design a building with bulbous veins and a purple domed roof on the top."

"Then again Mum, has anyone ever described the inner vadge as resembling a stack of sliced roasted meats, as you did to me once?"

"Yep, sweet pea, I did.  Yet again, there's no Opera House or scenic bridge that is based on our mounds of Venus, dear heart."

Despite this grotty talk, my spirits were flying high. I loved that she and I could have these kinds of brutally honest chats, using humour to soften the horrors of growing up and swimming safely past the bobbing icebergs of peer pressure, internet unreality and heightening hormones.  I loved being witness to her insight and ways of viewing the world around her.  I loved seeing her throw back her head and laugh in delight; a combination of relief and joy at being able to goof off with her mother before tackling Design & Technology class.

I was warming to the theme. "And don't get me started on those over-inflated party balloons that are supposed to represent the average woman's breasts," I exclaimed, pushing both hands out in front of my own chest, as if they were struggling to keep hold of two heavy bowling balls.

"MUM," Sapphire hissed. "You have just impersonated a woman with enormous boobs right outside the entrance to my SCHOOL.  Could you BE any more embarrassing?" 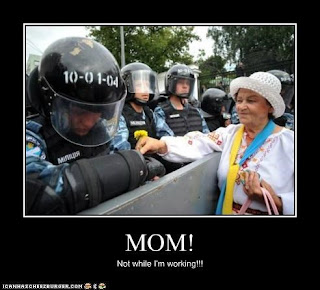 But then again, so can she.  Sapphire leaned in through the car window. "Oh geez, I've just given myself a major wedgie sliding out of the car and now have a long walk across the quadrangle where all the windows are facing!"

She'll be fine.
Posted by MedicatedMoo at 3:52 PM

She will. It's good to talk.

When mine were younger there was a really good radio show they used to listen to and youngsters would phone it asking things like did they really have to have oral sex if they didn't like it. A lot of kids were hurting themselves and each other and the Dj explained that they didn't have to do anything they didn't want to and most of their friends were probably making it up. I think they took it off the air because it was too strong but they were doing a great job.

I think the easy access to pornography these days ruins intimate relationships because it gives males these crazy ideas that those things are "normal".

I remember that Ben Elton routine and of course he is right.

And for such a fragile piece or - erm - "equipment" they are in the most awkward place.

Seeing a naked man run is one of the funniest and bizarre things you can ever witness.

And every man knows - it is NOT a beautiful sight - despite the fact that some men think that releasing the winkie can make a woman suddenly turn into a sex-starved nymphomaniac.

The truth is, of course, that most women will just laugh.

Or is that just MY experience?

Not sure, Anji but hopefully it's all 'offline' but still happening!

OpEx, that's what we're worried about, but hopefully the crushes that boys and girls have on real people in their lives will mean a lot more.

PlasMan, I remember seeing an 'arthouse' movie with LC years ago about an eskimo - Atanarjuat: The Fast Runner.' It was an interesting movie in that most of his running was done absolutely naked!

Oh, lots of things to google. I hope that like people seem to be able to dissociate themselves from on screen violence, so too will they with pronography. While I am the last to lecture anyone about pron, I have come across some very sexually jaded young men who had done in twenty years what took me forty years to do. By twenty five, they were wondering, what next? Then again, I see that young people still hanker for a relationship and all that goes with it.

I am always in awe (and more than a little envious) of your relationship with Sapphire. Such a wonderful grounding for the dangers of adolescence in a perpetually connected world.

Let's hope so, Andrew. It's probably not as bleak as we think, but for someone just about to enter the confusing world of high school 'relationships' etc, it must seem rather scary.

Thank you, E-Child. Sapph and I have our moments but I hope that she always knows that I'm there for her, will listen to her and empathise. Or give a good hug.

I think you are quite possible the best mum on the internet and Sapphire is so very lucky.

River, you're making me cry, but your comment is one that I'll treasure and revisit any and every time I don't feel anywhere near like the 'best' anything! *sniffle*

That is so great that you can have conversations like that with your daughter. Seems like you guys have a really wonderful relationship. :)

We do, Ropcorn. I feel so honoured to spend time with her.

It's great that you can discuss any subject with your daughter, Kath. Not too many people can do that.

Thankyou, Wilbo. I just figure that her questions and observations should be respected and I'd much rather wince slightly at the issue than not be included at all.