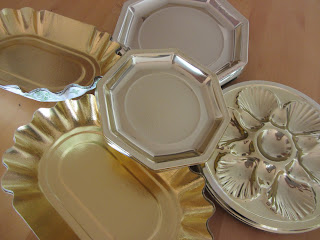 Regular readers of this blog (and I'm also including you, yes you, dear lurkers) will know that - call it what you will - flea marketing, second hand scrummaging or jolly brocanting - has been a new-found joy of mine since arriving in Switzerland.

A friend living in Choulex (pronounced 'Shoelace' but without the 'sss' at the end) let me know that a disused aged care home was selling off everything inside and outside the place. Would I like to go?  Look, who doesn't need gold plastic barbeque plates that include scallop servers?  That's right, no-one. 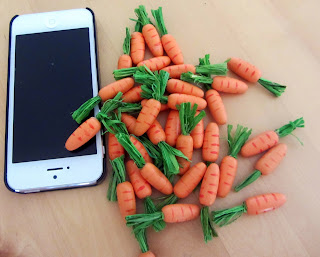 Sapphire and I were immediately struck by the age of the building which, (sorry, I forgot to photograph), was most likely over two or three hundred years old.  It was a classic several-storeyed Suisse-French farmhouse with thick stone-filled walls, solid, rough-hewn wooden beams and not one floor that was level or at right angles. Maybe that's why the place looked as though no-one had lived there for at least a decade.

It touched something in me to see boxes and boxes of seasonal decorations.  Baubles, baby trees, tinsel, Easter rabbits, 'golden anniversaire' trinkets, halloween pumpkins, candles and ..... mini carrots. I just had to have them. For what, I'm not sure yet, but Love Chunks fervently hopes that they and my golden croissant will soon end up somewhere he no longer has to clap his beady blues on them. 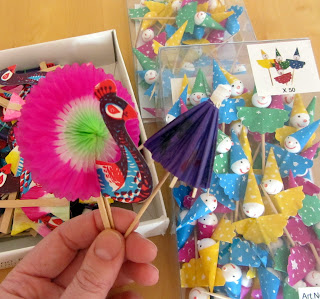 Boxes and boxes were filled with coat hangers, felt hats, cardigans and, saddest of all, dozens and dozens of empty photo frames. Did the staff empty them out when a guest departed in order to save space when handing over clothes and belongings to grieving relatives?

We were invited to look in every room of the house and noted that the walls, banisters and lift doors were all painted pink: was it a bold generalisation to assume that this particular aged care home catered for women only?  Names were still pasted on the doors with photos of each lady; clearly all long gone but hopefully peacefully so.  There was a lingering sense that it had been a decent place to live and work in.

Up on the top floor was a still-fairly-well equipped medical office and several rooms with hospital beds.  Further up the hall - and being careful to tread lightly as the floorboards were spongy and the beams were now forbiddingly low - we found ourselves in a beauty salon. "Oooh, I'd love this," Sapph exclaimed at seeing a double-seated, hair drying helmet on a stand in the best pale brown and cream plastic that the nineteen sixties had to offer.  Nearby were lockers with names neatly written on each and benches lined with  folded aprons, smocks, bottles of congealed nail polish and hairspray cans.

Board games, videos, books, paints and boules suggested that the ladies here were pretty happy.  Stacks of Villeroy and Boch dinner settings in a floral pattern, wine glasses, vases and much-used ovenproof creme brulee dishes indicated that the meals weren't too shabby either. 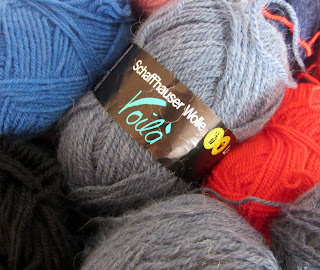 A vinyl suitcase from the 1970s revealed a barrel load of wool; worth hundreds of francs if purchased today.  It seemed an insult to take the pale violet, salmon and soft white mohair and cashmere balls, so the sturdier, plainer ones were selected to knit more blankets-for-the-homeless in front of the telly in order to prevent me from picking at the skin around my nails.  Another suitcase held the needles - how many hands had used them, and what had they created?

Kidney-shaped vomit bowls (I toyed, very briefly, with the idea of buying one and using it to serve up cashews to shocked dinner party guests but Sapphire talked me out of it), bed pans, shower gels for sensitive skin, walking sticks, wheel chairs, crutches, bandages and ointments a plenty with beige and rose-patterned chairs stacked up to the roof.  Streets ice-cream outdoor umbrellas jostled for space next to large framed photographs of seagulls and industrial-sized fridges that were being measured up and lugged away by fellas blocking the driveway with their truck. 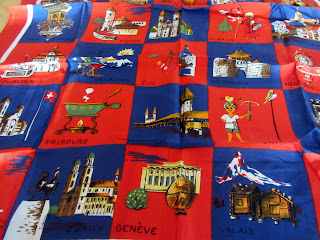 We both loved this scarf that featured all the capital cities of all the Swiss cantons and bought another one that did a very good imitation of a green-themed Hermes classic.  The third was an Australian tea towel featuring the 2005 calendar. "I'll fold it in half and make it into a cushion," Sapphire said, her attention now distracted by something really unique. "Oh will you look at that......" 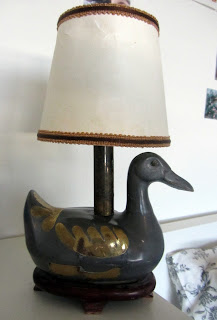 A duck lamp.  A duck lamp!   There were at least twenty of them stacked on a bookcase and my only regret is that I didn't buy them all and decide to set up a funky coffee house/second book shop with duck lamps on each table...... This one is now sitting (and works) next to Sapphire's bed. 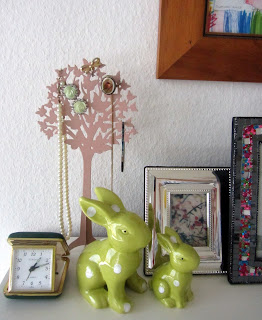 I often remark that Sapph should have been growing up anywhere between the 1920s and 1960s because she adores finding retro treasures such as the travel clock pictured above, now proudly displayed in her room.  Therefore, when we found some pearls and the finest, softest navy blue leather gloves that fit her hands perfectly, she had to have them. 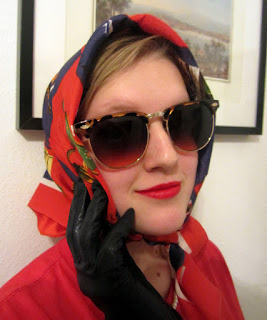 Milly had spent the afternoon at home with Love Chunks enjoying the sunshine streaming through the large living room window as he tried to watch the NAB cup on the laptop. 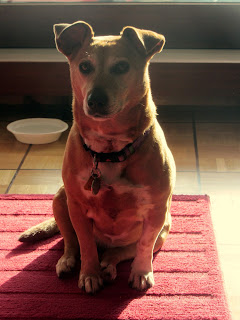 When we bustled in with a bulging Nanna cart and several bags, he patiently sat through our excited presentation of 'finds', nodding and saying 'aah' at (mostly) the right time before noting that we hadn't found anything for him.  "There was a zimmer frame that caught our eye, POG*** dearest, but don't worry, your next glass of wine will come with a clown-faced toothpick perching on the edge."

And, as per the Dog Code of Living With Humans Who Are Easily Amused, Milly too was forced to model the scarf: 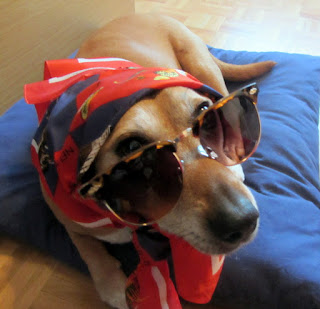 ...which she did keep on marginally longer than the bra 'ears' we forced her to wear a week or so ago.  All this loot for the grand total of fifteen francs!

*** POG - Pompous Old Git.  Applied only to Love Chunks and not the previous occupants of the aged care facility.
Posted by MedicatedMoo at 5:47 PM

Sapphire looks truly amazing. Such class! And I want those bunnies...

She's got class alright and rather good taste in bedroom decorations too!

What a brilliant place to get to look around. People move to round here to retire so not much chance of them closing down a retirement home.

I love the duck lamp, you can keep the plastic carrots.

Perhaps you could freeze the carrots and use then as unique ice cubes.

You found some wonderful things. The duck lamps would sell like hotcakes at Camberwell Market. Sapphire has added 10 years to her appearance, haha. Do remind her to set her phone alarm and not rely on the less than reliable travel clock alarm.

Poor Milly, dressed so we can laugh at her. Lucky she doesn't know.

Oooh. That duck lamp is amazing. Never mind the store, I would have wanted one (at least) for every room in the house. And yes, as always Sapphire does look amazing. Does she know/accept that fact?

I don't like the duck lamp, but I love Sapphire's green rabbits. I had an identical travel clock when I was 16, given to me by dad as a gift when I left home to live with mum.
when you mentioned nursing home, I thought you'd be buying things like wheelchairs and zimmer frames, you know, to have ready for your own old age...or when the achilles goes again. (hopefully it won't ever)
Such a sale wouldn't happen here in Aus. I don't think, I suspect everything would just get sent to the local tip.
I'm curious about what you might do with the mini carrots, you'll have to let us know.

Anji, you're not the first person to liken Sapphire to Princess Grace, but I do feel the need to defend my carrots - they're made of wood, not plastic! :)

Andrew, never fear: the travel clock is liked due to its retro-ness and green colour. A digital watch is used for an alarm. I am often tempted to 'buy up' and see if such things as duck lamps would sell in Australia one day....

E-Child, if I tell Sapphire that she's even vaguely on the attractive side, she just shakes her head and says, "Nope. You're just biased, Mum."

River, the zimmer frame was briefly considered but then I didn't want to annoy the universe and assume that my Achilles would let me down again. Mini carrots seemed like a much safer option.

Love that picture of the carrots!!!

Saph looks classy! I used to have a travel alarm like that about 30 years ago!! It sounds like you had an interesing and fun time. The nearest I ever got to anything like this was a sale of a bankrupt concrete factory, a great operators chair and very cheap extendable ladders. It can be fun!!

I know exactly what would go great with that Duck Lamp, 3 flying ducks mounted on the wall above. I'm sure you'll find them at another flea market.

OpEx - the carrots just appealed to me, for some reason. The fact that there's so much detail. At the moment they're sitting in a little ceramic bowl on my bookshelf and I just smile goofily when I see them. We all need something pointless in our homes!

nuttynoton, I'd dearly love to go to more 'closing down' or big car boot sales in the UK someday. The ultimate road trip - fossicking and then Bed and Breakfast....

OOoh yes, Wilbo43! We had three gorgeous 1950s flying ducks in our Adelaide house until the mirror fell to the floor and killed two of them. I'd absolutely love to find three again.

"We all need something pointless in our homes"
I couldn't agree more! Mr A comes to mind.... nah, just joking. Having moved house twice last year (out of old house to rental, out of rental into newly-built house) I had to massively de-clutter, and made a solemn promise to myself that I would not buy STUFF any more. It's so hard to keep to that - it is fortunate that I am not presented with these sorts of temptations. Wooden carrots! Duck lamps (how could you not buy them all??) So cool.

Thanks for sharing - we can all brocant vicariously :)

Thanks Alexia - you've given me a purpose now: I'm brocanting on behalf of you, too!

My dad had two travel alarm clocks like that, and one still works! I always loved them, and I still do.
I love your mini carrots, and the duck lamp! Treasures all.
Poor Milly.

My Dad still *has* his, JackieK!

I should go to more flea markets, they seem like so much fun. Love the duck lamp and Milly looks like such a cool movie star in those glasses and scarf. :p

My Life In Sweden - I'd love to go to a Swedish flea market someday too. Milly very very grudgingly allows us to take her photo before wildly flapping her eyes and thus dislodging both the scarf and the sunnies.

Your foresight in purchasing those KILLER baby carrots just before Easter will make you the envy of your apartment block ...

And the vomit bowl entree dish is GOLD - is there time to go back for the full set??? And see if anyone recognises what they are out of context??

Never fear, Anon - POG is thrown out - and received - with the greatest of respect. And rueful recognition!

RedNomadOz, I'm regretting NOT buying all of the ducklamps than the vomit bowls....