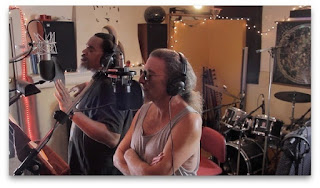 I don't often publicise things on this blog in direct posts, but today is different.

One of the joys of being a freelance writer, editor, tutor, web page opinion-offerer and anything else I can get away with claiming to be is that I often get to work with and for some very talented and creative people.  People who are braver than I am; setting up their own businesses, inspiring others, making a dream happen on their terms.

Wolfram and I met a year ago to discuss doing some serious work - his day job and mine.  This all occurred without a hitch and he went on with life his life and I mine.

What I'm finding now is that clients come back, but not always for the same kind of work.  This time, Wolf had a personal project he needed some of my freelance tomfoolery for an album he wrote himself and partly recorded with the help of Frank Zappa band members Ike Willis, Arthur Barrow, Tommy Mars and Ed Mann.

After all, why not track down these legendary dudes to help add some extra oomph to your first album?  Wolf travelled from Geneva to California sparing no expense as he lived, drove and wrote in a rented camper van before, during and after their recording sessions.

He's made the first mix of the album which is a funky mixture of rock, jazz, spoken word, humour and very melodic riffs.  I was lucky enough to hear it a few weeks ago and contribute to some of the lyrics and help set up the project page.  Let's just say that the songs touch on issues such as overuse of corporate crapulence (buzzwords) and the story of a man and his family doing whatever they can to cope with today's world. Funny and touching and a damn good listen at the same time.

Wolf is now on Indiegogo seeking helping with final funding to return to the US for a second recording session that will complete the album and make it available via digital download and in CD form. From as little as $5 you can be part of a unique album that features brand new music and deservedly revered musicians.

Otherwise, if you know anyone who admires Frank Zappa's musicians or likes the idea of supporting a man with a dream that deserves to come true, please forward them this link - http://www.indiegogo.com/projects/my-new-cd-with-frank-zappa-s-band-members-be-part-of-it/x/2247128

I'm really thrilled to be involved!
Posted by MedicatedMoo at 4:18 PM

A lyricist as well eh, your talents shown no limit! I shall definitely supporting this, keep up the interesting work

A lyricist as well eh, your talents shown no limit! I shall definitely supporting this, keep up the interesting work

I am going to check this out :)

You're a lyricist!
Lockett Rockets.
Wolfram is certainly doing it all-stops-out.
They were indeed, The Mothers Of Invention. Even the wives had degrees in music. One of the good things about being a Baby-Boom-er, is that I had the thrill of hearing Weasels Rip My Flesh when it was radically different from anything else ever heard.
I will forward your link then go to San Francisco to play my bongos in the dirt.

For as little as $5, just "how" would I be involved with the album?

Thanks too, OpEx - Wolf and I will be updating the indiegogo page with new perks soon.... it's been fun developing those - esp the office pack and t-shirt designs.

Ann ODyne - Wolfram is a huge Zappa fan and I've had to acquaint myself with FZ just to see what Ike, Tommy, Ed and Arthur were involved in. Some of the lyrics are indeed hilarious!

River, for $5 you help Wolfram fund the final recording session and get the CDs into ready-to-play form. It's a contribution but he will send you the very first song in it's current format to give you a taste of the new album and how a song is put together. Sorry for such a clumsy description: I'm hoping to get Wolf to put up a video featuring himself (instead of just the Zappa band guys) explaining how he writes the songs and works on putting all the voices and instruments together. It's been a really fun experience for me.

Good luck with that, Kath. Sounds like you might become (even more) famous if this album takes off. Unfortunately I'm a little to old for that type of music, I prefer Berlioz and Bizet.

No worries, WIlbo43 - but if you know of anyone who might be interested, feel free to tell them about it!

Frank Zappa - a legend. Might pop over and have a look (on my return to Manchester).

Thanks PlasMan. Bear in mind that Wolfram is his own man in terms of music, but it's pretty amazing that he managed to get the Zappa band guys to record the album.

That sounds like a really interesting project to be involved in.

Seeing the studio picture made me think. You might find some work doing voice-overs if you look around. i did two a long time a go and it was fascinating.

Haha, when I read the title I wrongly 2nd-guessed that this post would be about (I'm sure no relation) 'Plugger' Lockett!!!! Although on 2nd thoughts, maybe it is?!?!

I hope you remember the little people now that you're famous ...

Ah yes, Plugger Lockett, RedNomadOz. No relation but his footy money isn't to be sneezed at!

Whoa, Frank Zappa's musicians? They had to be the best. He was the pickiest bossiest bastard ever (and had to be really when you listen to his stuff.) I'll definitely support it on Indiegogo.

Is this the same guy?

Sorry Helen, but my Wolfram has 'Wolfram' as his first name: Wolfram Klug.