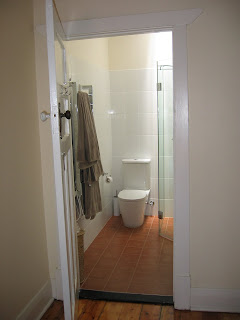 Sigh. It's been eight long years since we've been through the stomach-clenching stress of selling a house and looking to buy another.
In 2000 we handed over the keys to our little red 1950s clinker in Heidelberg Heights (home of neighbour bogans fond of drunken and naked domestics at 3am) and moved back home to South Australia with a one year old baby and a crabby blue heeler in tow.
Now we're selling our beloved old dame of a home in Adelaide and moving back to Melbourne; this time with a nine year old young lady, a friendly Jorgi and nervous white rabbit as entourage. The car, however, is still the same - a now twelve year old Magna station wagon with its fair share of dings, dog hairs and cassette tape-only sound system.
Love Chunks' work opportunities are going to be more challenging and wider-ranging at Nerd Central (aka the Bureau of Meteorology) in the Docklands and I'm hoping to get Sapphire settled into her new school/sport/music/social life whilst also keeping my beady snot green eyes out for any writing opportunities that arise.
Yes, the competition will be much greater than in Adelaide, but hopefully too there'll be more avenues to investigate and maybe even more willingness to entertain submissions from a writer who is not related to Nicole Cornes, has never appeared on Big Brother and is not currently - nor ever in the past - been busy shagging an AFL player.
Anyhow, the process involved in tarting up our house has been exhausting and, hopefully, rewarding. Dramatically decluttering and rediscovering the forgotten arts of dusting, wiping down the glass shower screen and weeding has been but the tip of the sweeping, mopping, furniture shifting and perfect-bed making iceberg and it was therefore a relief to swan off to New Zealand for a couple of weeks and let the agents hold open inspections without us actually living in there thoughtlessly messing up our own work.
Two weeks and a delayed flight later found us arrive smack bang in the middle of an Open Inspection (sounds rude in any other context), and we asked the taxi driver to drop us off at the park instead. It was a rather sad little scene with Sapph and I standing uncertainly under a bottle brush bush surrounded by our wheelie bags and backpacks as LC dashed up the street, wandered into our home as though he was a 'looker', silently nodded to the agent and surreptitiously swiped the car keys out of the front bedroom and backed the magna out of the driveway. Hopefully none of the potential buyers thought that car thieves were spectacularly audacious types in Trinity Gardens.....
..........and my heart twinged when Sapphire said nervously to me this morning, "Don't worry Mum, I haven't messed up my room at all by being selfish and playing with my toys or getting out my papers to do any drawings." How frickin' cruel am I, denying my own child the right to play, relax and enjoy her own little corner of the world?
Well tough. Fingerprints, gluesticks and rabbit hair are buggers to remove. 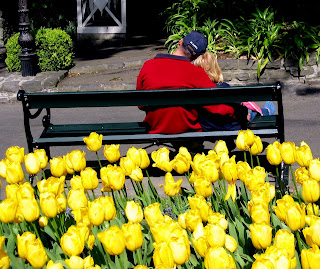 Wow, it's tough to pick up and move, especially giving up your comfort zone. I hope you guys sell the house and have an easy transition! And that daughter of yours is so considerate...

Open inspections are hard on kids. We've been through two. Now I'm renting and the annual property inspection is just as hard, we have one next week and L is already freaking. "We've got too much stuff, can't you ever throw anything out? The place looks like burglars have been though. Remind me to cut the grass". I had a look at your house on the web, (recognised it by the extension), it looks suitably clean and gorgeous, so don't worry.

Glad to hear you made it back safely! Hope the house sells nice and quickly so you can move Sapph into packing up mode instead of not making a mess mode!

I envy you just a little. I'd love to be moving out and starting a new adventure. Shame its such a hard time to sell. Whoever buys it will be getting a beautiful home I'm sure. Bless the kid ... at least the weather's fine she can draw outside!

...As a geeky, balding, abused umpire!

But LC, don't you already get your fill of being called a Filthy White Maggot at home?

Been meaning to talk to you about this Melbourne business....hell of a way to move over to the right side of Magill Road.

Wrong side of Magill road here, and maybe, just maybe, the wrong side of Flemington road over there....?

Gosh what a very fine looking bog you have there Kath!