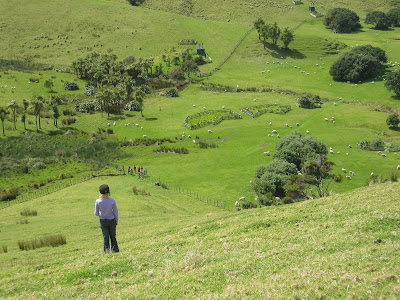 We three locketts are spending the South Aussie school holidays in New Zealand's North Island.
We've only got two weeks, and were advised (quite wisely, as we're discovering) that it would barely be enough time to see the North island, let alone the South. We'll come down and visit the bigger island in a couple years' time when it's seen as cool and not cruel to hang your child upside down from bridges on elastic or by flinging them down cliffsides.
About a day after booking the trip, we had a few big decisions to make. Firstly, Love Chunks just-missed-out-by-this-much on scoring a two year gig at the World Meteorological Organisation in Geneva. It had been on the boil for far too many months, which of course leads to dangerous thinking. And hoping. And assuming. Stuff like, "Well if the treadmill conks out, there's no point getting another one because we could be living in Geneva by then" or "Might as well get that card-carrying Mummy Mafioso Matriarch at the school gate in a headlock and mash her fat face into the playground bark chips because I won't be here for her poxy fete day fiasco," and such like.
To therefore find out that, after many months of nothing, the powers-that-be decided to leave the current lack-lustre spot-filler in the role without even interviewing LC was devastating. For too long I'd been entertaining the pleasant idea of being the person who 'kept the home/apartment fires burning', looked after Sapphire's school needs (a bilingual English/French establishment please), planning weekend and holiday jaunts around Europe in our funky new Fiat and keeping up the tappin' at the laptop in colder climes had its appeal.
About a day later, the Melbourne Meteorological office contacted Love Chunks and asked him to consider a return to the city of bad iced coffee, cretinous Collingwood fans and Bell Street bogans. We said yes, and put our beautiful, beloved Trinity Gardens house on the market. Any thoughts of sheep, hokey pokey icecream or the rotten egg gases of Rotorua were put aside for gardening, dusting and de-cluttering about an hour after I sweat soakingly completed running the three hour 'How to write a self help book' workshop at the SA Writer's Centre. My presentation that morning was about as sensible and orderly as a seed-sowing epileptic during a dust storm.
So, when the Geneva dream had flipped us the bird and scooted off into the far horizons, I'm ashamed to say that, like Bert Newton, cheese twisties and Homy Ped shoes, the thought of travelling around Kiwiland didn't seem quite as exciting and even on the actual plane flight over, I had barely opened up a brochure on the country let alone the in-flight magazine. I'm more relieved to say, however, that it's bloody nice to be wrong and to be pleasantly surprised instead of predictably disappointed.
You've got to love a country that: 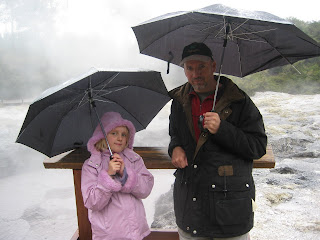 Travelling around in a car 16 years younger than our own; eating food that is mainly crumbed, deep fried and sitting on top of a chip pyramid and yet to spot a live kiwi has, at the very least, given me respite from worrying about the sale our house, planning and packing for our soon-to-be 'new' life interstate, wondering where Sapphire will go to school and just what in the hell I want to be when I grow up (in Melbourne) and missing Milly the dog so much I rush over to pat and coo over any and every New Zealand mutt I see ......

....... all before arriving home, picking up Skipper the rabbit and Milly and hiding our dirty laundry, dust and dog hairs for a few more hours until the last open inspection is over. 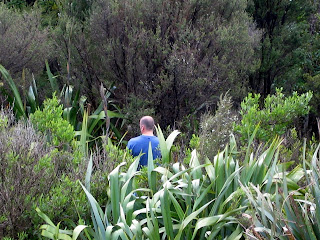 "Mum, what's Dad doing over there in the Kauri forest?"
"He's er, um, he's just taking a little break."
Posted by Kath Lockett at 4:46 AM

Ooops sorry, if we'd known you were coming we'd have tried to find some better weather for you! I am jealous of you getting to go to Melbourne, I love that place with a passion (though I will admit to never having made it to Adelaide so I could be biased.

oh you are so brave...NOT You break this news of a move to me via a blog whilst in NZ none the less! WTF is with that??? lol I hope it works out for you and the clan, Nin Tai won't be the same though :- ( I trust you are flying back here for the weekend of the City to Bay in 2009 then??? hahahahaha

Mmmm, chip pyramids........
Hokey pokey ice-cream sounds interesting, what is it exactly, please? Your photos are pretty, I've viewed NZ through google earth, but all the greenery and all the cities look pretty much the same to me.
Whatever will you do in Melbourne without FUIC?? Perhaps weekend runs to Adelaide to stock up?

Ha! Thought you'd gone AWOL. Hey, New Zealand has everything and all in one place! Have a blast. Shame about the Geneva job and I'm not sure whether you've lucked out going to Melbourne or not. Although I quite like Melbourne, hey you're slowly creeping towards Sydney . . look me up when you get here! And enjoy your fush und chups wuth vunuger! *hungry now*

I'm a bit disappointed at not getting to visit my destination of choice in NZ -
WataWhakawasat just wasn't convenient to drive to.

Sorry Anabels, I didn't mean it to be a complaint - everything here is so green, ferny and lush and we don't have to have four minute showers!

Naomi - it's been such a whirlwind since from about the day of the City to Bay walk-fun-run-thingy, with decisions being made and the NZ trip already booked and paid for. The land agent reckons that about 60 folk have been through our house which is rather eerie to think about when I'm in another country.

River - hokey pokey is ultra creamy vanilla with little pieces of toffee in it. Very nice, and has to be my 'dairy intake' seeing as their iced coffee is both as rare as sighting a real live Kiwi and about as tasty. On the positive side re Melbourne, apparently Farmers Union Iced Coffee has now made its way there in some shops. This is a vast improvement on it only being available at the Big Koala (or lump of koala poo) at Dadswell's Bridge.

Baino - Geneva on one hand; Melbourne on the other. I guess it's a big change for us either way and I veer between feeling rather teary about selling my lovely home and excited about the opportunities that may present themselves in Melbourne. Oh who am I kidding? I'm pharken pissed off about Geneva and shit-scared about big bad Melbourne.....

lc has a point. The guy who took us on a tour of the Waitomo caves (to see the famous glow worms) said that a hire car company once had an advertisement that read, 'We don't care where in the Whaka you take our cars'

I always feel so bad leaving our dog at the kennels. He was shaking, the poor baby (he's 6 now)

Goodness, everything is very up in the air! I hope the transition to Melbourne is smooth and well, anywhere has got to be better than SA, right?

Kath, I hope I make your move a bit more acceptable if I let you know that FUIC is pretty easy to find here in Melbourne ... it's in my local supermarket!

PS If you want to talk primary schools here (of the government, friendly community, sensible kind), I'm happy to do so. I have two PS aged kids, and another revelling in big bad highschool, so I'm pretty up-to-date with what's what here.

Squib, let's hope so - and especially that whatever we get for our Adelaide house buys us something that we three humans, one orange dog and a little white rabbit can live in. Preferably without the misspelt ADCD graffiti that we had on the side of our Flemington rental in 1994....

Delamere, you are ON. As soon as we've agreed/narrowed down on the suburbs we like (ranging from Brunswick to Bentleigh), I'll be needing that chat....

Well, that was a BIG NEWS post. Lucky I was sitting down.

Bummer about Geneva but happy to hear about the Melbourne move. Selfishly-speaking you will be closer to us Sydney-siders and yet another good excuse for a quick Melbourne getaway (now we'll have two good friends and one brother/sister-in-law to visit).

NZ looks gorgeous. We have talked about a family driving holiday to the land of the long white cloud, but probably not for about 5 years. We're thinking about our BIG South American re-visit in 2011.

I'm sure your lovely house will sell without any problems. With the renovation it hits all the right real estate buttons. Good luck.

Look out for Hobbits !! Sounds like a lot going on have a great vacation before getting back to the business of moving (-: