Brilliant writer Elisabeth from Sixth in line has been discussing a professional family portrait that she's been given as part of a recent birthday present.

Despite being apprehensive about it, she explains the concepts of 'punctum' as it relates to photography. I won't pretend to be familiar with Roland Barthe or his 1980 work 'Camera Lucida' but, as my grey matter understands it, 'punctum' describes the unplanned associations one makes with a photograph.

Usually, in my own experience, 'punctum' pops up in photographs that aren't formally posed. Either the subjects depicted are unaware of being snapped or there's been timing flukey or lucky enough to catch a unique situation.

Seeing as it's still Sunday, I'm going to give a nod to River's Sunday Selections tradition and plunk down some photos whose 'punctum' productions particularly grab me. 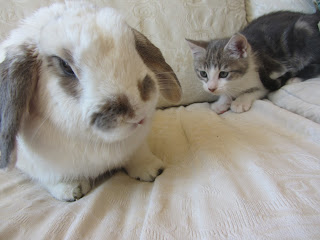 Firstly, our ex-rabbit, Skipper.  We caught up with him during our recent visit home to Oz and found that he's just gained a new friend, Gus the kitten. Gus likes to regularly leap on top of Skipper's back. Bunny boy is rather tolerant, but, after the sixth ambush, he kicked out his back leg and Gus found himself off the couch and sprawled on the floor. 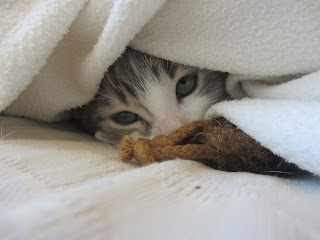 Eventually, even 13 week-olds get tired, and this is what Sapphire found when she lifted up the blanket. 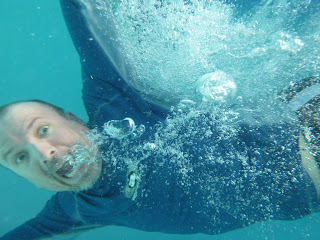 In Adelaide, a 43C day was made a lot more fun by using Kent's underwater camera.  Regular readers will know that my husband, Love Chunks, is a softly-spoken, quiet achiever kind of bloke, but during the photo session in the pool he did all manner of duck dives, bombs, swim pasts and chop sueys for attention. I'm thinking of having this one enlarged and framed. 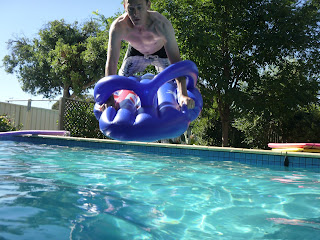 Could this be any more Australian? Our mate Kent, mid-jump, on a plastic thong coloured in the national flag directly into the pool. 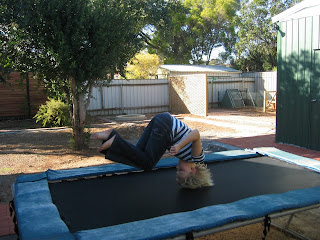 Earlier times, circa 2007.  Our underwater rain water tanks had been buried, the under-grass drip watering system was about to be laid and then some turf finally rolled over the top.  The chickens - Hermoine, Luna and Ginny - were happily settling in and Sapphire was busy bustin' her moves on the trampoline, unaware that I was nearby. 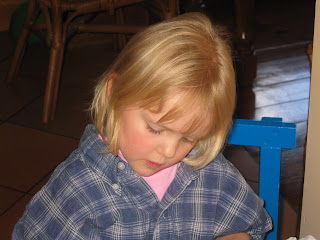 Even earlier, around 2003.  Our intense young artist was busily painting in her pen drawing of Ursula from 'The Little Mermaid', wearing one of LC's old shirts.  She spent many many hours at the bright yellow table that my father had made for her; specifically on projects involving empty boxes, sticky tape, play dough, paints, chalk and pipe cleaners. 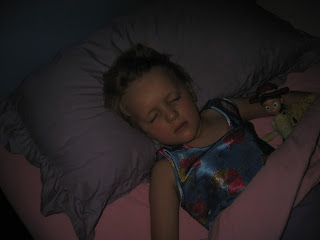 Artists do get tired though. This one had recently been diagnosed with Asthma, and was told that Elmo was too furry to sleep with. To deal with this upsetting news, she was allowed to pick something/someone less hirsute.  Jesse the Cowgirl was a regular night time companion for several years. 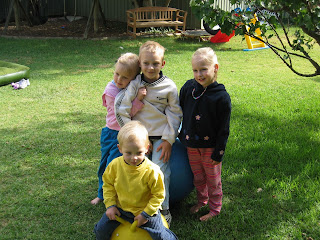 A portrait of my god son (Will, in yellow on matching space-hopper), his two older siblings and my child.  Sapphire clearly had a few unrealised romantic feelings for young Mr P and took the opportunity to steal a quick embrace before the word 'cheese' had ended. 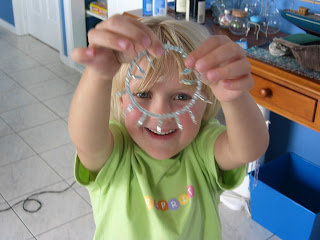 Despite being on the far end of Daggy slash Tomboy slash Unkempt, for a couple of years I made a lot of jewellery to help the school fundraising efforts. Sapphire was very keen to show off the bracelet she'd made (which was subsequently sold, a few weeks later, to a rather sophisticated older adult). What turned out was a slightly out of focus piece of jewellery but a lovely portrait of her happy little face. 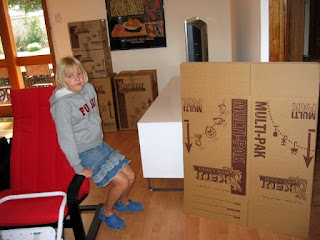 Not so happy here at the start of 2009 though, despite my urgings to smile.  Leaving the only home she'd ever remembered to go and move to Melbourne was a time of uncertainty for Sapphire. Seeing some of those friends a month ago put a huge smile back on her face. 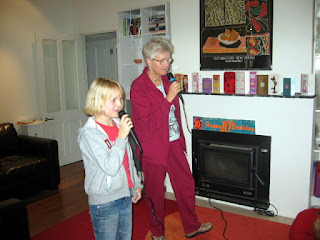 My mother has a beautiful singing voice, and I've reminisced in the past about her sterling efforts in many a musical production. Why not duet with your granddaughter to ABBA? 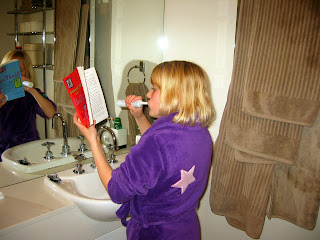 Holding a book in a damp bathroom whilst cleaning your teeth might not be the best idea, but who was I to tell her off for reading?  Multi-tasking at its finest. 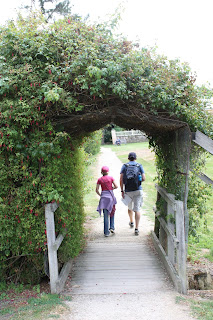 Tasmania, January 2010. The first stirrings of tweenage angst from Sapphire.  And yet, then as now, my heart surges when I see her and LC together. They're more alike than they realise. 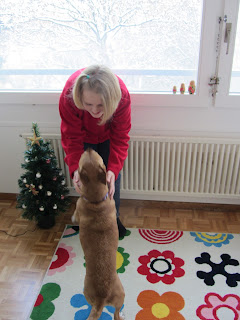 Geneva, 2012. An impromptu greeting from Milly that is received with thanks. 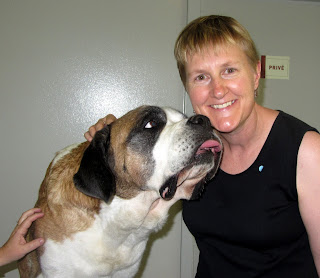 Martigny, Switzerland, is home to the St Bernard Museum.  Worth a visit because the town also contains some impressive Roman ruins and a museum that regularly snaffles art masterpieces such as Van Gogh, Monet and Picasso to have a look at.

Back to the dogs. This fella was in the very first steps of slurping me entirely across the face, leaving me covered in a clear-but-thick saliva jelly substance that smelled of St Bernard's bum hole. Still worth it. 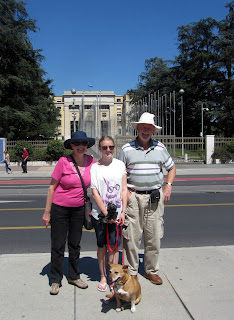 When my parents arrived, I insisted that they pose in front of the UN, which has become a tradition for all of our house guests. We discovered that none of the flags were up - something I'd never seen before. Just after taking this photo, a gaggle of kids walked by. 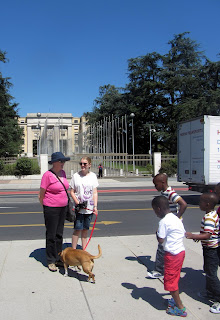 Is your dog friendly? Can we pat him? 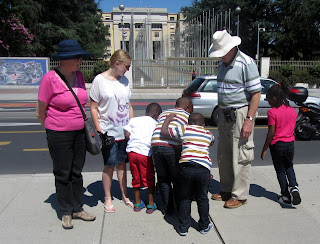 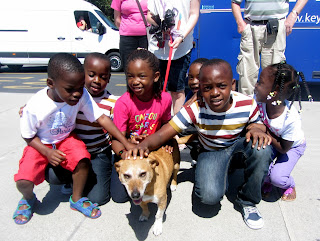 Eventually, their mother and Auntie persuaded them to keep on walking and I decided to take another photo of my parents, Sapphire and Milly, "just in case the first one doesn't work out." 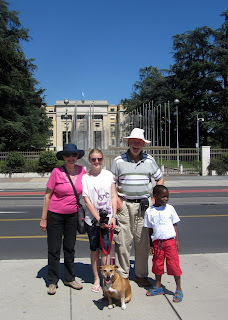 .....this cheeky little guy dashed in, posed as the extra family member, and dashed out again! 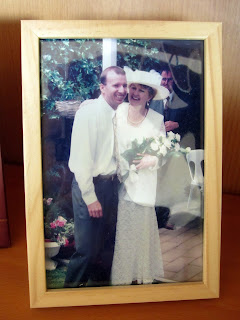 This is the photograph I was referring to when commenting on Elisabeth's blog post: 'When LC and I married a millennia ago, we did the usual thing and hired a professional photographer. I hated the awkward poses, wearing too much make up and having all eyes on me (plus a brain tumour that, undiagnosed at the time, made me feel rather ill) and the photos all reflected that. A wedding guest friend, however, gave me some snaps he took on his old kodak and one immediately grabbed me. We're slightly out of focus, but LC and I are both not looking at the camera, but at something else that has made us laugh. It's the only one I had framed and is still on our bookshelf.'

And, finally this one.  This is the one that I will get enlarged: 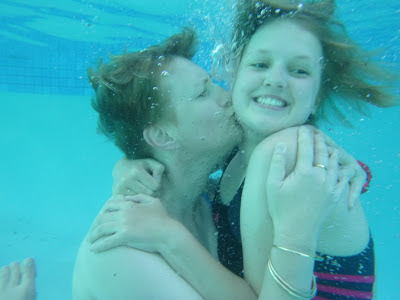 I love you, darling Sapphire.

Posted by MedicatedMoo at 12:52 PM

Some great photos there. I'll have to do something similar - I've got all sorts of weird and wonderful ones hanging around.

Agree with Plasman, great pictures, you always look back at your old Photos and say awww! Particularly when you have ones of kids when they were young and friends and family who are no longer with us, brings a lump to my throat. Sounds like you had a great time in OZ!

Okay, I guess I'll ask then: That last photo. Why are you naked?

Fantastic photos. Blogs like this make me wish I had some photos of me - any photos of me. Finally, after four decades, I'm beginning the process.

What a great look through your photos... Thank you for posting these!
You and Sapphire both look beautiful in the last one :)

Kath, this is twice in two posts you have soppy tears welling in my equally soppy eyes. Please don't make a habbit of it.
Brilliant photos - and I think you should have both the underwater gems enlarged.

nuttynoton, it took hours of very pleasurable and sentimental roaming through photos to find these ones. It's amazing what treasures you find.

Franzy - NOT naked. Bathers were definitely ON. I think that mine and Sapphire's arms have just hidden the straps of my VERY SENSIBLE, PRACTICAL AND ABLE-TO-COVER-ALL-OFFENSIVE BITS OR BITS THAT MIGHT BECOME OFFENSIVE bathers.

Pandora - keep on keeping on. With the ubiquitous access of smartphones and digital cameras, it's becoming easier and easier to click away and, when you're at home and download things, see some real gems.

Thanks Alexia. It was taken by my best friend Jill, whose toe can be glimpsed on the left.

E-Child, I'll try to make the next post a silly/happy one for you. Fully intend on enlarging the underwater ones. I reckon they'd look pretty quirky on the wall here in Switzerland. "Oh yes, Hans, we took them here when we were swimming in Lac Leman. Yes, the one that is fed via melting snow..."

That last shot is definitely a winner. Also, I read while brushing my teeth too, got to fit it in somewhere in the day.

Well phooey! Your photos haven't loaded, so I'll be back first thing tomorrow to get a look at them.
I can't wait.
Is it tomorrow yet?
Now?
Rats!

Of all the kids admiring Milly, I think the cheeky one is the one that will be a high achiever.
And yes, the underwater shot is ace.

Some fun 'punctum' in your shots. I bet Milly was glad to see you when you got back. Where was she while you were away? St Bernard Drool is revolting. The last shot is a beauty to get enlarged but take out the photographer's toes first.

Great stuff, Kath. It's good to read that my post inspired your thoughts. So many images here and too many to comment on, though I was touched by the story of your wedding shot. They're funny things these photo shoots, so honest and yet so fake. I'm about to go off on ours later this afternoon. Wish us luck.

Kirstie, I've never tried reading a book while brushing my teeth, but have answered the front door *and* taken a phone call. Neither of them are recommended.

Fruitcake, I agree. That little guy was the first one to approach us, ask for the group to be photographed and then play the joke. He'll be a star for sure.

dianeb, the photo is currently being enlarged and the photographer's foot has been duly removed. Milly stayed with Aussie friends who didn't go back for Christmas. They love her dearly and included her in dinner parties, trips to the snow, chalet weekends and Christmas itself. When we walk down their street, Milly's tail starts wagging madly in excitement!

Good luck, Elisabeth! I reckon it'll turn out better than you think.

No, no, get the Love Chunks Underwater one enlarged too and frame them both side by side (same frame, that is.) They're GOLD!

It's normal for my laptop to not load photos first time round. They're here now though, and well worth waiting for. I agree that last photo should be enlarged and framed and the LC underwater one too. They're fantastic. Skipper's new little friend is a real cutie. I don't agree at all that doggy drool licks are worth it. I like dogs, but don't drool on my face please. I'd be framing Sapphire holding up the bracelet too.

Helen Balcony - Love Chunks and Sapphire/myself are on order to be enlarged onto canvas. I think they'd look so out of place here in snowy Switzerland that they're a *must have*

River, I might buy a picture frame for Sapphire and her bracelet. Love that little face!

Note: that is my foot in the photo!! xxJ