I'm supposedly in the thick of NaNoWriMo (27,000 words at last count) and factoring in a sick Sapphire (three days off school) and my own four day migraine (still lingering), but hopefully you'll understand why my inclination to blog has been fainter than a Kardashian talent. 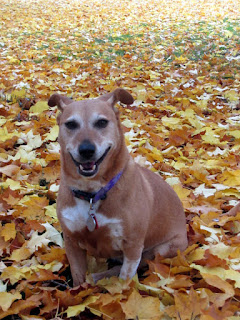 But autumn has arrived in Geneva and a brocante or two has been visited. Bring out the photos!

Firstly, a pencil sketch with '1881' written just above the signature. Yes, after I proudly popped it into an IKEA frame, Love Chunks pointed out that the stall owner could have just written the date in there, hoping a sucker like me would be eager to part with a huge ten francs. Fair point. 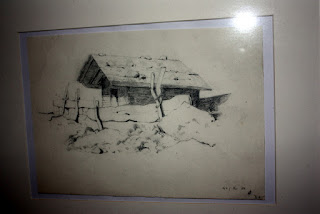 Another stall holder thanked her lucky stars when she had five copies of this old watercolour of Geneva and five of us duly purchased one each for two francs a pop. Clearly drawn in the days before the Jet D'Eau emerged from a busted pipe in the lake during 1886 or the UN was ever heard of. So, mass produced tat, but I like it anyway. 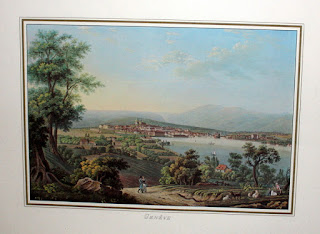 Found these French spice drawers and instantly fell in love with them. Not so LC or Sapphire, who both said 'Erk' when I stuck them in our admittedly-not-very-sympathetic Billy bookcase: 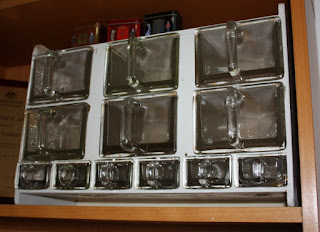 But YOU can see why I liked it, can't you? Glass drawers made in handy scoop shapes? 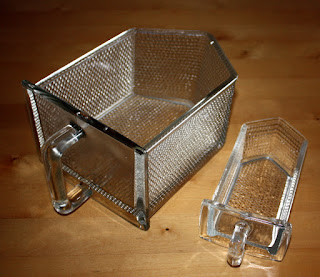 Ahem, moving right along. We have darling Milly, reluctantly being forced to sit in the corner and pose in front of my twelve franc bargain - an old wooden snow sled! 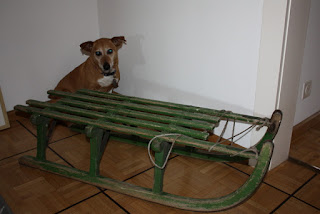 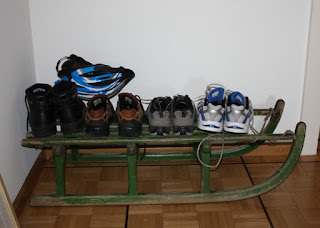 Peter Rabbit has always been one of my  picture books and Sapphire has a tiny figurine depicting Peter snuggled up in bed after his adventures. A Wedgewood plate for five francs - yes, thanks. 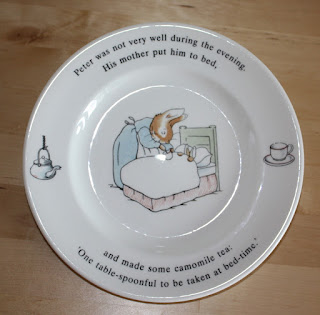 And a cheap poster of the classic WW2 shot of St Pauls' cathedral surviving the devastation of the blitz? In an IKEA frame that I realised was so unbelievably cheap because it didn't have any clear plastic cover or glass in it? 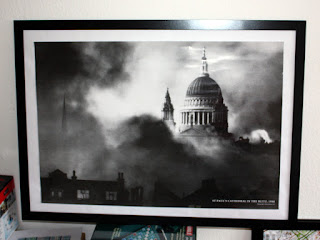 Second hand book sales are another addiction of mine. English versions preferred of course and when there's a twice-yearly clearance to help raise funds for more books AND a bunch of old Pommy ladies are selling cups of tea and fresh sandwiches filled with cheddar cheese and Branston pickle, I'll be there with bells on. And found, on the 'Antiquarian' table, this little beauty from 1909: 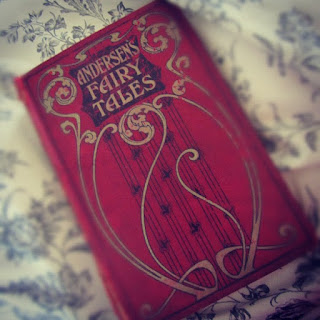 It was interesting to note on the spine that he was called Hans Anderson. No 'Christian' inserted in, unlike Danny Kaye's movie of 1952. "I'm Hans Christian Anderson, I've many a tale to tell..."

Even more interesting was that the book was a prize awarded in 1909 by the Vicar EA Johnson to the student John Jenner for 'General Proficience, Good Conduct, Punctuality and Regularity.' Poor mite; dumb as dodo dung but turned up anyway. Probably liked his prunes, too..... 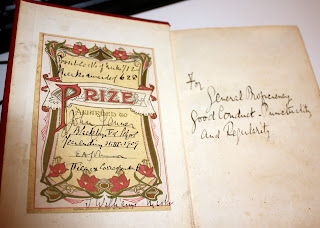 Modern books aplenty of course. There's few things nicer than knowing you have a delicious pile of reading awaiting you. 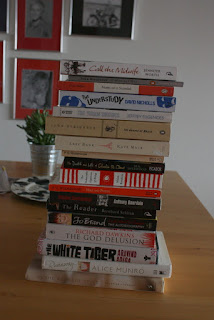 .....with one additional selection that even Milly doubted I'd get through. 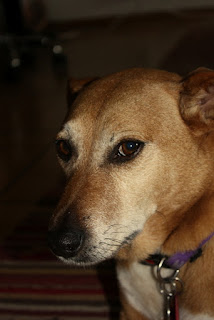 Yep. War and Peace. Brand new; never been attempted. Handed in for re-sale instead. Will it end up the same way again...? 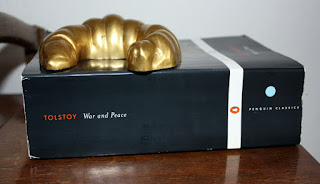 Time will tell. Until then, there's always time to step away from the desk and wander outside for some autumnal squirrel spotting. 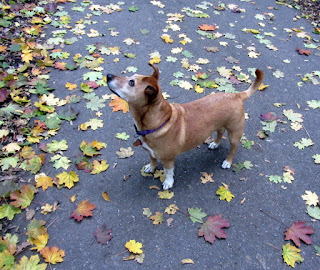 Posted by MedicatedMoo at 6:14 PM

Milly looks lovely amongst the leaves.
We're inclined to have a stand at a brocante and come home with more than we started with.

It's soooo good to find English books, isn't it?

I quite like the French spice drawers, they'd be useful as teabag storage or for small and tiny stationery items, or even jewellery, keys, etc.
I see you have a copy of Call The Midwife in your book pile and The White Tiger too, I've read those. I can't make out the other titles except The Understudy. I've never attempted War and Peace either. It looks like it would make a good doorstop.
Is this illness of Sapphire's the same time as last year? There may be something environmental, some spring thing.....

Some great buys...I love the wooden sled and also the French spice drawers.
Hope Sapphire is feeling much better.
With winter soon upon you nothing better than a good book, cup of coffee and curled up in your favourite chair.....looks like you've got plenty of reading to keep you going all winter.

I read Hans Christian Anderson's fairytale about the darning-needle to Lisa last night. Yes, I'm 25 and she's 34, and I made up voices for each character.

Those drawers are pretty cool!

I like the last pic of Milly, she almost looks like she's scattered a jigsaw around her!

The book was a great find, but I wonder whether young John was very pleased to receive a book of Fairy Tales. I doubt a modern day John would be.

We too had a Billy bookcase, same colour. I sprayed the black metal work with silver to make it look a bit more modern. Sister now has it and it groans under the weight of her junk.

I love that last photo of Millie, the colours of the leaves are gorgeous.
Forget reading War and Peace, just cover it in nice fabric and use as a foot rest.

Wonderful post (of course). I love the photos of Milly. I want to reach in and give her great big hug.

Anji, you're right - I hoover up just about *any* English book that's in decent condition.

River, I also bought 'The Reader' by Bernard Schlink, 'The Understudy' is by the same writer who did the lovely 'One Day' and a few others that just appealed to me. I think a couple of them I'd heard from you via your blog.

Thanks Aquascrap. Sapphire is back at school today, but has to be taken out tomorrow arvo for a specialist appointment. Seems like her entire immune system is stuffed up.

Aw shucks, Hannah. You'll have to fight off Sapphire for the Hans Anderson book - it keeps 'disappearing' into her bedroom!

Fernstar, that's a lovely observation. She's happy to investigate the falling leaves only - and that's a big only - if there are no squirrels to be seen/sniffed/heard.

Andrew, you're right. The book seems to be a fairly un-fun choice for young Master Jenner, doesn't it?

Thank you Lynne. I'll give Milly a big hug or three on your behalf; will that do?

I love those spice drawers - though I would probably hide earrings in them.
Books are a passion, and one can never have too many.
I hope that both you and Saphire join the ranks of the seriously healthy soon.
Milly, is of course, a sweetie. And knows it.

Well, that's what someone told me and as I had already read half I'm inclined to agree.
The question is, having read half and ignored the boring bits, can I cross it off the list or not?

Please maek sure you bring the spice rack and Hans book back to Oz!!
Do you think the pencil sketch is a photocopy?
Last pic of Milly is beautiful. Maybe should try to mount (is that the right word) the sled onto Milly wearing her reindeer horns for a X'mas photo. heheeheee
She won't be pleased but....it iwll be so cute.

Fruitcake, if you've read half of W&P, I'd cross it off - that's a hundred percent more than most people!

Milly with reindeer antlers, drb? I'll mention it to Sapphire and see if she can put her evil/creative powers to work :)

I love your spice drawer - what a find.
As for the White Tiger in your book pile - read ith caution - didn not enjoy it - but that is just me.

And so well done on NaNoWriMo - just trying to find a minute to write is hard. xx

I love that picture of St Paul's. I saw it recently on a documentary about how the British people "evolved".

Love Milly in the leaves. I'm interested in what you'll do with all this stuff when you get another posting somewhere else in the world. Hopefully you don't have to pay for the shipping. I like the books you scored especially the hans Anderson one. The Peter Rabbit plate was a bargain too.

So many great things! I have never read War And Peace either, looks like there is quite a lot of pages to get through... But it is one of those books I guess one should give a go one day...soon....

Lovely fall photo of Milly in among those leaves too. :-)

I bought a non-reading friend a Penguin book that reduced classic literature to Twitterature. To test it out I read War & Peace, and it wasn't a drag at all!!! Does that count??

And why can't I find good stuff like that in Aussie Op Shops???!!!

Pandora, I was a bit doubtful about 'White Tiger' too, but at one franc (and in the English language), it made its way into my hands.

Plasman, the posters (and smaller postcards) are on sale at St Pauls. One of the photographs of the century.

dianeb, I'm not sure what 'treasures' will find their way back home to Oz. Or when.... and, will Oz be the next step or somewhere different....?

Thanks ropcorn. You know I'm a sucker for your Lisen photos too.

RedNomadOz, can you send me the link? I'll save it in case I need it if the 'real book' gets too long.

lovely pictures, the autumnal colours are fantastic and Millie fits in well.
I wonder who John jenner was? When you search on the WWW there are lots of them now and some dating back many years obviously a popular name. what did he become and what happened to him, gets your mind thinking.

all good shopping.
I like that watercolour of the lake too.
beautiful cover and bookplate in that prize.
Milly you poor thing - don't catch squirrel fleas. X X
Kath & Sapphire all my best wishes for fast recovery.

Beautiful photos! You had quite a successful week shopping it seems -all good finds. I love the spice drawers.
And I love that last photo of Millie -so gorgeous