'Thank you in advance for the attention paid to these lines .....'
..... is how the letter began.
And I should have remembered it when, whilst having my second cup of coffee for the morning, I was out on the balcony (as is my wont) and glanced down to see ---- 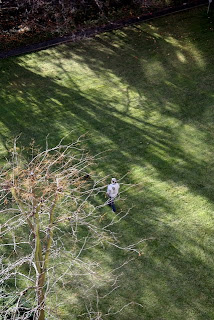 A strange man. ON the lawn. NOBODY is allowed on the lawn of the shared gardens. Even the gardeners don't linger any longer than they have to.
Narrowing my eyes like a suspicious pensioner, all I lacked were the net curtains. I did, however, have a camera.
He was young, smartly dressed with a quirky flat cap, busily talking on his mobile phone.
Every now and then he'd duck down by the tree and whistle - ah - he was wearing gloves and waiting for ......
.... his friend the falcon. Yes, the letter: 'According to the decision made by the joint owners at the last standard general meeting, we inform you that a falconer will proceed to the startling of the pigeons. Mr Umberto the falconer has started the last four weeks and will be followed by additional specific interventions which will last six months to optimise his work.' Thanks google translate.
Not that I ever seen that many pigeons about, let alone been annoyed by any of them.
Yep, he saw me. I called down, "Bonjour Monsieur! Photo, si'vous plait?" 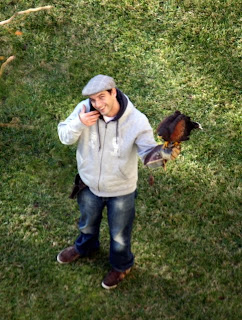 "Oui!"
So how many of us have a falconer come to help with the gardening?
Posted by Kath Lockett at 8:00 PM

What a lucky spotting, a falconer. We use those fake owls in our garden, but a real live falconer. Wow

You know you're inthe 21st century when someone describes a person dressed in heavily sandblasted jeans and a grey marle hoodie as "smartly dressed". :-D

Cool! So, they are wage-earning professionals. Not just a hobby.

I'm speechless. No, wait. How I would love to see that proposal in our body corporate meeting minutes.

If I may borrow from Messrs Parker and Stone:

I don't wanna sound like a queer or nuthin, but that Falconer seems both cute and powerful.

Kath, that's brilliant. It should be brought to the attention of the Melbourne Cricket Club for the seagulls although with some matches, the seagulls are the only things moving.

I know, Helen, I know. During a fairly frazzled few weeks, it made me smile. A lot.

'Cool' is the word I used a few times too, drb. He's been back many more times since but I haven't dared go down to see him up close in case I'm in the way.

Andrew, I dare you. Title it 'Startling of the Pigeons' like our letter!

Franzy, yes. From a fellow apartment dweller, he does indeed have admirers, both old, young, straight and bent.

JahTeh 'The Startling of the Seagulls' could surely be done with an appearance by Shane Warne's new teeth?

EC - yep! However, you get to see more than your fair share of birdies on your blog :)

RedNomadOz, 'exotic' is something I don't ever hear re my lifestyle so you've made my day. Now if you'll excuse me, I have a fresh poo sample to take out of the fridge and ferry across town by tram......

So. Cool. Can't get over it (I see I'm not alone.) If you haven't read "Kes", get it. I had a short brush with falconry in Chilham Castle in Kent. This was in the early 70s. There was a girl there called Emma who was studying falconry seriously and she ended up training them with Sheikh Zaid in Abu Dhabi, then went on to do films, commercials, etc. It never occurred to me there would be a job in it bird scaring in the city. But it is a life - you couldn't go on holiday and leave them.

Ms Balcony, I loved reading 'Kes' in school and saw the movie.... I imagine that this falconer is fairly busy as pigeons are pretty prolific and there are a lot of multi-storey buildings with tall trees in between.

I wouldn't mind one like that. Your french is coming along well!

Excellent - I would love a falcon - but not for gardening ...

Anji you're way too kind. With the nurses who come to see Sapphire three times a day, I really struggle.
"Cafe or the?"
"Laver vous moins et guest toilette?"
"Sapphire is OK?"

Many smiles and thumbs up and always a 'Bonjournee' and 'Merci' is all I can manage!

PlasMan, I want the falcon to come and fly up to our balcony to say 'hello.' Well, maybe just the once....

Vanessa, I know - I have to pinch myself sometimes!

That's absolutely sensational. He (the falconer) looks like he would be okay if you asked to go down and take some photos of the falcon coming back to him at ground level.... go on..... you know you want to ;)

I don't think I'm his favourite person at the moment, ShellOz, because he was around the other side of the building the other day which is where my dog Milly is allowed to go.

She, um, took him and the falcon by surprise I think. No damage was done (Milly's too arthritic to catch anything and wouldn't know what to do even if she did) but we were clearly interfering with their work.