From what I can gather, it started here at Her Bad Mother and I've been tagged by the extraordinary Pommy/Aussie blogging Mother Extraordinaire, Baino.
I’m supposed to link to a couple of other 'mum' bloggers, from other countries around the world, and they’ll write their posts, sharing 5 things about being a 'mum', and then they’ll tag a few more bloggers from their own country and from other countries, and so on, yada yada meme meme meme........ And you’re more than welcome to join: just write a post of your own and link back here to the originator of the idea - http://badladies.blogspot.com/2009/03/world-according-to-mom.html and leave a comment. Or something like that.
But. And there's always a 'but' isn't there? But I want to change this to being a parent, because a glance at my favourite blogs shows that some of the most revered and worthy reads are from Dads - Myninjacockle, Franzy, Ashleigh and Tom - with children ranging from zero to their twenties.
1. I found out I was pregnant and publicly announced it at my 30th birthday party which was a shindig held in our back garden on Melbourne Cup Day in Melbourne. It felt like the city was having a day off just for me. Everyone got drunk, sunburned and obscenely full bellies from the day-long brunch whilst I hid under the tarpaulin-draped Hill’s hoist and sensibly slurped Passiona.
Other pregnancy foods that got a real hammering included salt-n-vinegar chips (which are usually avoided by me), cheese twisties, icy cold milk, chocolate (as if I needed a growing being inside of me to provide the reason), bacon sandwiches, oranges, tomatoes and biscuits. Yes, I gained far more weight than just Sapphire and fluids but remained overwhelmingly proud of the fact that I could wear and do up my own lace up shoes right up until the due date. 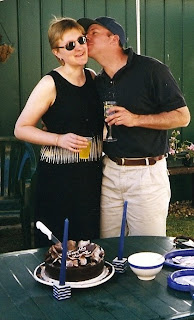 2. Sapphire was born at the Women’s and Children’s Hospital in Carlton on Sunday 23rd May 1999 at 2pm, a mere 29 hours after my labour pains began at a dinner party on the Friday night. Memories are scattered but the image of Love Chunks leaning over me, struggling to maintain eye contact as he ran alongside the gurney as the doctors were rushing me into the operating theatre was admirable, especially seeing as he was crying and wearing a shower cap thingy on his head at the time.
Our baby eventually emerged without the need for a caesarean and was a uniquely purple colour for a few minutes. Even now, the entire birth experience still visits me sometimes in dreams, as do other even less-pleasant ones of me rushing to catch her from falling from a great height - this is particularly frightening as I was never a sports hero when it came to catching or throwing, but I have found myself actually acting out the movement and wake up shivering, on the carpet, hands outstretched. 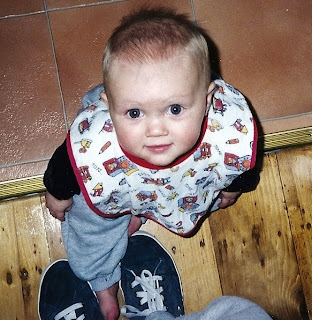 3. She was a brilliant baby who started sleeping through the night from four weeks and seeing that I couldn’t breastfeed (due to medication to keep my brain tumour in check), Love Chunks got to share those duties and bond with her extremely well. So as much as I'd like to do that all-knowing nod of sympathy to exhausted new parents and say, 'Yeah, we've been there' re the torture of sleep-deprivation, I really can't.
However - and this is written knowing that it is barely a substitute but at least it's an effort - more than once we were subjected to spectacular displays of projectile vomiting with absolutely no warning beforehand. Thankfully our dog at the time – Tess the insanely protective blue heeler – rushed in and eagerly lapped it up and I was too tired and relieved to feel revolted. 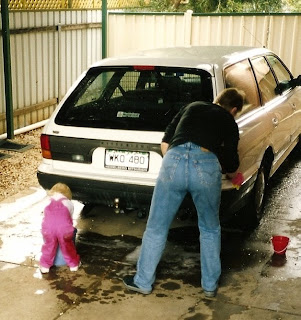 3. 5 Sapphire was a born helper. Cooking, car cleaning, dog-washing, bed-making, sticky-tape applying, you name it. Her curiosity was quirky and insatiable and she still finds pictures and shapes in the way that wood knots are in the fence, via papers are scattered on the floor or through oil spots in the driveway. I discovered that Creme of Tartar was a necessary shopping item as we went through oodles of bright blue homemade playdough and that clean margarine lids, yoghurt tubs and tissue boxes make wonderful animals, doll houses, presents and party favours. I found crudely drawn and cut-out love hearts in my laptop bag, wallet and briefcase which seemed pretty poignant from a four year old. 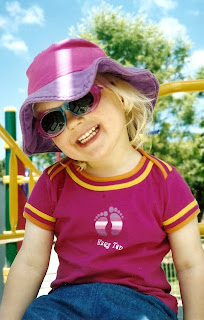 4. Rushing back to full time work when she was only nine months old and wondering why - about six years later - I was burned out, exhausted, unfunny, joyless and resentful made me assess some of my priorities. Plus, I had six new teeth inserted THREE times to thank for excessive night time grinding and clenching as just one aspect of the physical decline I went through.
The best decision I made as a so-called grown up and mother was to no longer be the parent who waited for the doors to open so that I could drop Sapphire off at before-school care at 7am in order to be at my desk by 7:30am. Also, I dropped the overtly fake ‘good mum behaviour’ of leaving work ‘early’ at 5:00pm in order to then rush home and work frantically at my second job as ‘mother’ for three or so hours before putting Sapphire to bed and opening my laptop for more office work until 10:30pm.
Waiting for my child at the school gate is one of the most important jobs I've ever done. Even now, at age nine and easily embarrassed, my beautiful daughter is as glad to see Milly's wagging tail and my goofy face waiting as we are honoured to be there. Few free things in life are as enjoyable as walking hand-in-hand down the street with your kid, listening to her stories of the day and laughing along with her. Such a privilege. 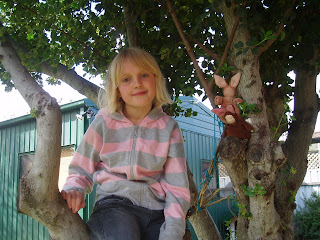 5. Now, it's Sing Star double competitions, rabbit cuddling and sipping our weak cups of green together as we watch ‘The Biggest Loser’. She used to tease me when I cried over the contestants’ sad stories, but now cuddles in closer as we watch avidly and urge them on to happiness and size Medium/Large.
On camping trips and weekends away with friends, I hardly see her. As the reliably boring person she relies on most during the normal days, I’m required only to holler out when meals are ready, to find her lost toothbrush and to surreptitiously check her itchy scalp for nits. To compensate, I give her more kisses when she's tucked up fast asleep than usual. She woke up recently and muttered, “Dad said I should be glad that you’ve got Milly and now I know why – you’d drive me even more nuts with the kissing and hugging if we didn’t have a dog.”
Anyone can have a go but the Mums I tag are:
Simply Natural
Deep Kick Girl
Listen no longer in Silence
Blakkat
Third Cat
PoetSquib
Naomi
Blogger on the cast iron balcony
Jabberwocky
And RIVER. Even though you're a commenter, not a blogger, you're an honorary one.
Dazzling Dads chosen to participate have already been mentioned. C'mon, get those photos out, get all misty eyed and get to work on a meme! 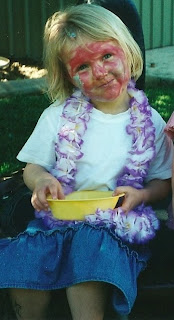 Five things I love about being a mum? Oh boy, where's my thinking cap.....
I'll have to get back to you with a guest post. Can't promise when.

Gee thanks. Being a parent of boys:

If I get keen I might write some more. Not such a fun time for writing things right now :(

Oh Plugger . . so sweet. You are a lucky girl and she is so beautiful. And that River . .if she doen't get a blog going soon I'm gonna, . .
Fantastic and you're right about the Dad's but I honestly don't know a single dad who's raised his kids alone. Although I think a Dishy Daddy version if this is worth promoting. Ashleigh, I could only see one photo but it is wonderful, kudos to you and please do the meme.
Oh Kath, you, me, Windsor Hotel 24th May - High Tea! 4pm. Bring the progeny and Love Chunks! There will be cake and ribbon sandwiches. Oh there might be fizzy stuff and I'm not talking Coke!

Yep, the pressure is ON, River! We're all counting on YOU!

Ashleigh, those two photos are excellent; a great study of a teenage boy in action doing something he loves (that isn't self abuse!)

Baino - will see if we can make it, as my folks are in town from SA to celebrate Sapphire's birthday but maybe they could come too or spend the arvo at my brother's place.....

Well mine is done but it never turns out sunny like I'd like it to be. Writing about motherhood brings out my dark side. Sorry!