Red Centre tour guide and all-round top bloke Geoff pulled Possum the bulky 4WD in at a dusty service station. "We'll stop here for lunch, get some petrol and be back on board ready to go and see Palm Valley in an hour." 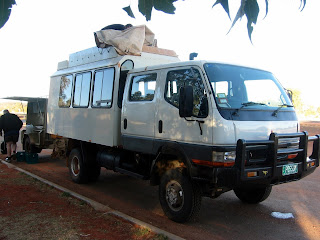 Lunch usually meant either sandwiches or a sausage sizzle and we got out the bread, cheese, sauce, fruit and salady things and set them out for self-assembly on a shady picnic table.


I had a hankering for a cold diet coke and Sapphire and I wandered into the shop inside. As our eyes struggled to adjust to the gloomy light, we found ourselves standing in front of a bloke who looked as though he'd eaten Santa Claus as well as all the pies. He eyed Sapph.


We took a step closer to the deli counter.

"Hey darlin, would you like me to teach you how to play the piano?"
She shook her head again. "No thanks---"


He grabbed her shoulder. "Well take a seat right here---that's right by the piano, and let's get cracking!"


Her anxious blue eyes looked towards me for rescue but I was still trying to grasp whether he was insane, intoxicated or deaf to her answers. "OK darlin' just play anything you want."


Giving up on being saved by her own mother, she timidly started a few scales. Pretty soon, a dingo trotted up and rested its head on the seat next to her. Sapphire glanced down distractedly and the bloke said, "That's right love, keep it up."

The dingo then jumped up onto the seat and walked across the keys, howling. As Sapphire played, he howled, Ooooo wooooo, Ooooooo wooooooo!


The audience, a large group of Kiwi tourists waiting their fresh-from-the-freezer meals of chicken nuggets and crumbed fish, clapped in approval.

"What's your name, darl?"
Sapphire started smiling. "Sapphire."
"Well Sapphire, thanks for playing along. Dinky loves a good singalong and is famous all over the world, did you know that? Give her a hand, ladies and gentlemen - yep, just take a seat with your mother over there and I'll tell you a little bit more about Dinky...."


Dinky, clearly no stranger to Jim's talks, flopped onto the floor beside his bulky owner and fell fast asleep, paws twitching as he no doubt played the piano in his dreams. Or Jim's face: time would tell. 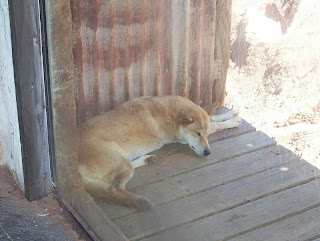 Half an hour ticked by. Our touring group were outside under a shady tree, eating sandwiches and fruit, chatting and laughing. Sapphire and I, on the other hand, were trapped.


Trapped and hungry, plonked in front row seats sniffing hot salty chips being eaten by tourists around us as we heard more about the exploits of Dinky's owner than we wanted to. He pointed to yellowing newspaper articles, postcards sent from 'fans from all over the world', read aloud some pertinent facts from an old childrens' book about Australia's wild dogs and shared with us the time he met two other dingo owners as they alighted from the Ghan in Alice Springs.

Jim's beer belly became strangely mesmerising as it jiggled precariously every time he raised his hands to enthusiastically point out another Dinky-related item he had previously staple-gunned to the wood-panelled wall. It reminded me of a walrus about to jump from the rocks into the sea, wavering, waiting for that perfect wave. How Jimbo could stand straight with all that fatty verandah leaning three feet in front of him was beyond my understanding.


My reverie was suddenly interrupted when Love Chunks's bemused face appeared pressed up against the spotted fly-blown glass window behind Jim. "What are you two DOING in there?" he mouthed. Behind him, our tour group were starting to pack up the plates, scraps and cups as Jim droned on: "Dinky has a few other songs in his repertoire and we've been approached to consider recording a CD......."


It was time. To do that thing that every front-row hostage dreads doing - get up to leave during a performance. I did some useless miming of pointing to my watch and then pointing outside, shrugging my shoulders in an exaggerated apology and dragged a red-faced Sapphire out through the screen door which banged loudly in offence.


Geoff's shoulders were shaking with laughter as he saw the 'What the hell...?' expression on my face. "Ah it was YOU that got it this time, eh? That's why I never go into the shop if I've got a tour group with some kids in it, mate. We eat lunch outside, use the loos at the back behind the petrol pumps and piss off before he nudges Dinky awake." 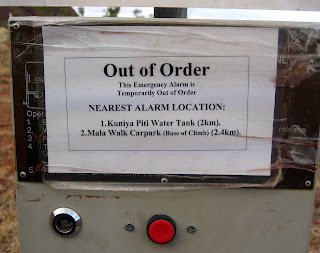 It was the only time that entire holiday that I wished I'd been childless.
Posted by Kath Lockett at 12:00 AM

There was a piano in the truck stop?
I must admit, I thought the first part of this story was a dream - piano-playing-singing-along-with dingo, beer-belly, walrus, CD recording ...

Oh no, I HATE to be buttonholed like that, I am way too polite and embarrassed to wiggle out of it. My hubby has instructions to come and fetch me after 5 mins if I am unlucky enough to be caught in the driveway by our CHATTY neighbours....

Yep. Not in very good condition, mind you, which is probably why Dinky the dingo is allowed to stand on it. And yep, all true.

Imagine, dear Cat, what it was like for my ten year old, who HATES being the centre of attention!

I think it was a bit mean of Geoff not to warn you in advance about Jim and Dinky. You could have left Sapph. outside and zipped in and out of the shop if you'd known. Still, playing piano with a dingo has to be a story Sapph. can recount more than once before her friends are sick of it. Did you get any lunch or did you have to wait for the dinner stop?
I like the look of "possum"; a good sturdy transport vehicle.

i do remember seeing this guy on the telly. and i don't recall much good coming out of the piano... or anything other than the dog really.

i used to half own a dog that was half dingo (although i half owned the whole... in case that needs clarification). he was the most handsome dog ever.
(oops. did Milly hear that?!)

Reminds me of a bloke at a place I used to work at. He never had much to do (he was totally inept as far as I'm aware). So he'd wander around and lob on somebody. He was famous.

But we had a system. If ANYBODY saw this guy getting settled with somebody else - such for example as walking past and seeing the getting settled for a nice long chat - then we'd be on our way, wait a diplomatic 5 minutes or so. Then phone the victim. "Hey fred, we have a terribly difficult technical problem. Can you come see us in the lab to sort it out?"

Hi... Looking ways to market your blog? try this: http://bit.ly/instantvisitors

Hi...Just droppin' by... If you are looking for ways to market your blog, I may help you in some way that I can. Visit Me Here! i will be glad to help you!

I can only imagine how I'd be living in the desert...getting poor kids to read my 'famous' horror stories and scary the shit out of them...:P

Although I've wanted to do it for a while, you've kind of inspired me Kath, so we're organising a 2-3 week central Australia trip for early next year! Got any 'must-dos' for me?

I thought that was an excellent experience, not everyone has a chance to play piano with a Dingo!!

I would have volunteered!!

And I hope LC saved you and Sapph a sandwich....

River, 'Possum' was brilliant and we were off-road most of the time.

Eleanor, I love dingoes and thought that Dinky was brilliant. I'd rather have spent time with him that with his tiresome owner...

Ashleigh, apart from the tour-leader, no-one knew what was going on and Geoff certainly wasn't going to help me!

Benjamin, it's a good thing you live in Melbourne or you'd be writing Wolf Creek 2 and traumatising a generation of young kiddies and Kiwi tourists.

Dr B, we didn't *see* Dinky after after Sapphire started playing the piano; just a pushy fat bloke that wouldn't let us get to the deli counter! And yes, LC saved us some lunch :)

Pub Daddy - Get yourself on a 4WD camping tour. That way the itinerary, petrol, meals and equipment are out of your hands and you can pitch in and help, laugh, enjoy the scenery, go walking and have a good holiday.

We went with wayoutback.com.au - but our magnificent tour guide, Geoff has finished up and moved to WA. Still, I'm sure that they have other good blokes or sheilas as well.

And to be honest... about a week would do it, unless you guys are driving up and back?

Oh that was funny. Obviously not funny for you at the time, but surely worth the temporary pain for such a wonderful blog story. See, every cloud... silver lining... etc.

I'm sure I've seen this on Sunrise or something. He is a famous dog unless there's another one out there. Frankly I think it sounds charming and one of those tales young Saph will take with her wherever she goes! And I've just realised that Eleanor is an Aussie! OI OI OI!

Haha!! Your experience was VERY different to mine! We CHOSE to go see Dinky - it was kinda like dinner theatre - and the whole experience was so bizarre it was good (in the way that 'Attack of the Killer Tomatoes' is so kitsch it's good). Jim did talk for a long while about previous experiences - but the story of how he & his family lost their business was fascinating (to me!). But yeah, it's different when you've chosen to be/do something, isn't it!

Thanx for dropping by!!