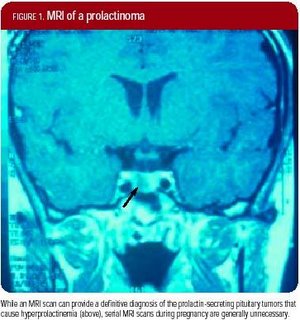 Way waaaay back in 1995, when Alanis Morrisette was being boringly blasted everywhere and we all thought that Joey from 'Friends' was cute, I was diagnosed with a 'macro-adenoma', also known as a Pituitary Prolactinoma (or Poo Poo for short).

It wasn't cancerous, but was a jaffa-sized (as in the Australian 1cm diameter inedible chocolate balls used to throw at annoying people in the cinema, not a real orange) little planet with a mind of its own feeding off my mind.

Luckily for me, the specialists soon stopped talking about yanking it out via my nose and were relieved to see that it shrunk itself to the size of a single grain of rice. My nostrils were no longer in danger of being raped and pillaged and the magic medical pills were received as gratefully by me as Sharon Shone with a positive movie review. As my regular specialist put it, "Look, you'll never be normal (which explains all my blogs pretty well), but you're about as normal as its ever going to get for you."

Despite this tantalisingly close proximity to normalcy, one of the specialties of this arsehole of an adenoma is its production of prolactin. As in breast milk. Yep, if we were living in 1807 instead of 2007 I could be making myself a rather handy living being the village wet nurse. Or idiot, but at least a few babies' lives might have been saved if my restless rack was restoring them.

Back to today. The tumour may be rice-sized, but Poo Poo still makes an effort to keep the breast milk production up. So yes, I have the enviable capacity to be able to politely lean over and offer to whiten your cup of tea during a meeting if you need me to (although no-one, yet, has been brave enough to ask). All it would take would be a quick lift up of the top, an armpit-fart type of motion and voila - white tea! During a karate class when we're required to hold our closed fists in front of our faces and our elbows up against our chests, my 'ol mammaries often leak in protest. Thank god our karate pajamas are white and the hall is hot because it just looks like I'm extremely sweaty.

Bountiful boobery aside, Poo Poo also sets itself up as the nerve centre for all things annoying (apart from reality TV talent shows and Kylie Minogue songs that is). Poo Poo will contact my old enemy, Mr Migraine, on a regular basis to come out of his lair and do his version of Riverdance in barbed wire stilettos behind my eyeballs or send Technicolour Yawn Man down into my stomach to force-fill up my sick bucket. If Poo Poo isn't on the ball, it will send someone less drastic but still bloody annoying to remind me of its existence: Acne Zit Man, for example, or Sleepless S**t Ball.

In the past few months however, Poo Poo has been pressing the buttons on the control panel with more regularity and these physical aches and pains have increased and got worse in their duration and intensity. Sure enough, my last blood test showed that my prolactin level had mysteriously shot up higher than a Goody Goody's hand during an algebra class.

It was time to be referred back to a specialist. That was in October last year and I've had to wait until mid-February for him to be available to see me. Since then, Love Chunks has endured tears, tantrums, anxiety, crankiness, wakefulness (due directly to my insomnia and overt turnings over and sheet-stealing), an increase in sick bed time (thanks, Mr Migraine) and having to shoulder our childcare responsibilities on his own. He hasn't complained once about it and keeps assuring me not to feel guilty about my 'down time'.

What I do worry most about is how Sapphire sees me: am I a sick and grumpy Mummy who spends a lot of time in bed and not with her? Yesterday, I nervously tapped on her bedroom door to ask her. "You're my funny Mummy," she said. "You do interesting things with me, you love me and make me laugh."

What about me being in bed, feeling sick all the time lately? "Oh, that's when Daddy and I eat chips or buy our lunch from Subway and watch movies like 'Star Wars', so we just have our own fun."

Good. I'm now feeling as relieved as my nostrils once did way back in 1995.

Have you thought about a brain transplant? I've heard that Paris Hilton isn't using hers!

But seriously, I hope the specialist has some positive news for you in February. Hopefully news that doesn't involve nostrils and sharp implements.

Sending you good vibes from Sydney, my friend.

look on the bright side, nursing mums have lower risk of breast cancer....