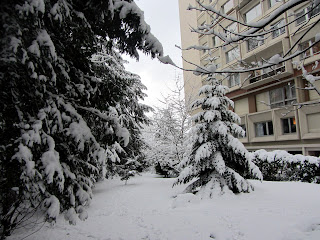 We might be living in Switzerland, but as Geneva is a tiny pimple that is pretty-well poked into by France, most of the foods, customs and lifestyle here is indisputably French.

Nothing more so than the bread. Long, thin baguettes comprise 99% of all bread sold and consumed in this part of the world. Crusty, fresh and flavoursome, it is designed to be bought and devoured on the same day. No preservatives are added, so twenty fours later your forgotten Pain Genovese would function better as a sturdy fence post than a breakfast option.

For those who prefer their bread in sandwiches, sliced white is usually in miserable, over-priced, over-packed and over-looked bottom floor shelves of the supermarket. It is often labelled 'American Toast,' and apparently lasts longer than a starlet's post-Disney career. We've learned the hard way that this stuff is to be avoided - anything made by the Swiss to cater for a populace they're unfamiliar with tastes like, well, it's been made by a country that hasn't a clue. See peanut butter and anything labelled 'Asiatique' for other sad examples.

Back to bread. If you're not prepared to spend fifteen francs on a filled baguette for lunch, then do what most of the locals do - buy it fresh from the boulangerie and eat it plain and straight out of the bag. Simple but delicious and all the crumbs are left on the pavement behind you.

So what do people do with the bread that's as rigid as Robin Hood's arrow stash the next day? They dispose of it, of course, but not usually in the rubbish.

Because it's winter here, they're more likely to festoon the gardens of their apartment complexes, public parks and green footpaths with their doughy remnants, roughly torn into chunks and scattered at the base of bushes and tree trunks. Birds and squirrels no doubt owe their survival to the bakers' collective aversion to preservatives.

So do domestic dogs. Milly's and my morning walks are often interrupted with many stops. Not just to wee over the signatures of other canines or to sniff for squirrels and the leavings of Crapauds, but to scoff the bread that's spread out like a stale smorgasbord seemingly every step of our journey.

In our own garden, what we lovingly and gratefully refer to as The Dog Forest has an abundance of trees and very little usage by the other apartment dwellers. It is mostly Milly's private playland to run, parade, sniff and dump in as she desires.

Recently however, someone has been sneaking into our pet paradise and leaving not just bread, but also apples and nuts for the Dog Forest fauna. Seeing Milly munch on almonds that were intended for the squirrels had me wondering not who the person was who was kind enough to leave them, but how on earth they a) could afford almonds and b) use them merely for fauna food. The apple quarters are usually only left by Milly because they're frozen solid, but on our next visit they've already been nibbled clean, leaving just the translucent peel behind.

The resident fox has also been in action, managing to snaffle a slow moving pigeon every other day. She leaves just the wings behind with feathers still on and a smear of blood in the snow. Yet again, this is frozen solid by the time we get to the scene and I'm relieved again that my furry companion is far too cold to contemplate rolling in these leftovers.

Back upstairs, Milly's coat is unzipped, her lead put away and my various layers are removed. She stares up at me, eyes asking for breakfast. "You've GOT to be kidding me, dog - you've just eaten a bakery display case followed by several nut clusters!" 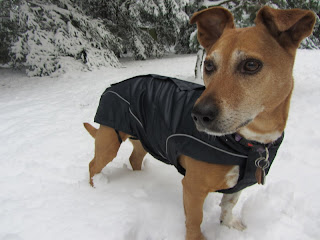 Labels: anything to prevent doing my assignments, food, Geneva, Milly

How about making "Pain perdu"? Slices of baguette dipped in egg (or egg and flour) and then fried. It's called 'french toast/gypsy toast' in English

Customs are interesting. We are all humans but depending where we are brought up makes us so different. While you find it difficult to get used to bread which is crunchy and rips your gums open and is stale the next day or hour, we are entertaining a Swiss backpacker who can't get used to soft white sliced bread full of preservatives, nor chlorine tasting water. It is interesting listening to her and Bill discussing Australian food.

I actually never understood the saying, "best thing since bread came sliced". O wonder all the time where's the pleasure of a gummy, stale tasting bread, full of preservatives, when you can bite directly into a delicious, crunchy, warm, straight from the oven bread? Although our bread has more white and tender than the baguettes.
Customs really are a funny thing :)

Anji, that's a great idea. Why don't other French-Suisse people do it? We 'used' up some with fondue today :)

True, diane_b. I prefer the Swiss bread, in fact. So does Milly!

uf, you're correct as well. Nothing made with flour beats a fresh baked baguette. I had to add 'made with flour' because chocolate is an entirely separate category.

While I've not had baguettes in Switzerland or France, I have had them in Vietnam and they were amazingly good.

Ahh, there is nothing like a baguette sliced open with butter, lots of ham and cheese and a little moutarde. My mouth is watering, just sitting here thinking about it. Enjoy real bread while you can, Kath. When you return to Oz one day, you'll be able to eat a sponge again.

Andrew, they really are something special. I reckon my bread consumption's increased 300% since living here.

Wilbo43, I love my baguette with a slice of emmental, proscuitto and a smear of mustard. Heaven in a batard!

Oh yes, baguettes rock. But we have a baker who makes a brilliant sourdough with olives, rosemary and garlic. Yummo. Sliced white? Not even for the birds.

On my only trip to Geneva, via Lyon, I realised as crossed the border between France and Switzerland just how close Geneva is to la belle France. And while working, I definitely enjoyed a baguette stuffed to the brim with jambon et fromage at lunchtime. I do't know what I liked most - the cheese or the bread.

Actually, in Zurich, a Swiss city I know very well, the baguettes were just as nice. Maybe France has infiltrated Switzerland a little more than the language.

Sadly, I buy sliced white more often than anything else, because that's about all my teeth can handle. I do sometimes buy fresh crusty rolls and even more occasionally a batard or baguette, but with all the chewing involved, my teeth and gums hurt for days afterwards. And I'm getting tired of breaking off yet another chunk of tooth or filling on something crunchy.
The baguettes etc do taste so much better though.

As a fellow nut-lover, I applaud Milly's stomach and think in disbelief of the person throwing them away as pet food.

You should try a spaghetti bolognese in China.

Nothing changes, all around the world. Except in Australia of course where we do everything well.

Milly looks very pleased and happy, though the cole must come as a terrible surprise.

Pardon the terrible typos. Too much red, and too tired after a day of futzing around with bathroom rebuilding and electrical work. Orf to bed I think.

Though... croissants and baguettes in France are pretty damn good. On the more German side of Switzerland I really don't remember them being quite so good though :) (In fact the food was pretty orginary, until farmers market day where we got some very nice fruit, bread, fresh fruit juice, etc)

When we were staying in Paris we immediately adopted the local custom of heading out first thing in the morning (with dog breath) to pick up the baguette. Or should I say... I was talking into adopting ziz habit. Ze rezt of ze familee, zay just zat aroun' waiting for me to get back with ze breakfust. Ziz was of courz only for one week but when in rome, az ze zaying goez.

EC, sourdough is very rare here, and wholemeal is not very popular either. Ah, sourdough.....

You said it Plasman - the holy trinity of jambon, fromage and pain. Perfection.

River, if you lived here, you'd be one of the (many) folk who tear off the end of the baguette before they step onto the bus, and eat the soft insides. Then scatter the crusts on the grass for the birds. :)

Hannah, a vegan forager could do rather well here!

Wally, you're right in that no country can really every properly replicate the dish of another, but spag bol ala China does sound pretty intriguing!

And 'dog breath'? Absolutely. If you're an elderly smoker out for your morning baguette, triple the effect!

Interesting views, I prefer wholemeal or seeded breads looks like it's just White baguette for me but I know it will be nice. Lovely picture of Millie and an insight into life in Geneva

Thanks nutty. You'll love the bread, but will have to get your 'roughage' elsewhere, like Swiss muesli.